Hirayama’s disease is rare cervical myelopathy, and we can find it in young males. In 1959 Keizo Hirayama described this disorder as juvenile muscular atrophy of the unilateral upper extremity. Hirayama’s disease is a rare neurological disease. Its symptoms include weakness of the distal upper limb and initial progressive muscular wasting in male youngsters. According to researchers, Hirayama’s disease is commonly found in Asia. It is not very common in countries located in the Middle East region.

The disease named Hirayama’s disease is also known as Monomelic Amyotrophy (MMA). It is a rare variant of amyotrophic lateral sclerosis in which distal muscles are more involved than the proximal muscles. It is rare cervical myelopathy. It becomes clear as asymmetrical, self-controlled, and a slow progressive atrophic weakness of the hands and forearms with male preponderance. This disease occurs because of the forward displacement of the spinal cord and the cervical dural sac induced by neck flexion. This disease is rarely seen in the Middle-East and most commonly seen in Asian countries. This disease usually affects young males who lie between the age group of 15-25 years. 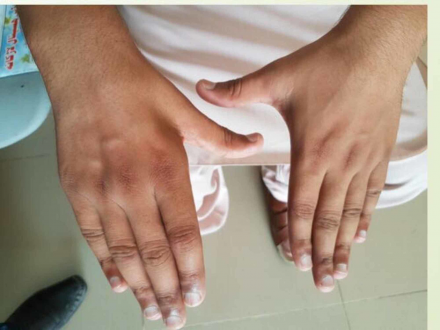 A person suffering from Hirayama’s disease experiences the following initial signs and symptoms.

These problems are observed initially in a person having this disorder, and afterward, these issues turn into degenerative issues. At the initial stage, one can notice these problems on the one hand, but later, these issues into both hands. As time passes, this disease becomes worse in a person, as hands become thin and become wasted with zero functionality. In cold temperatures, this disease becomes even worse because of poor blood circulation. It is sometimes difficult to detect this disease as the symptoms of this disease are quite similar to other degenerative neurological issues. However, MRI is the best option to detect this disease, but only an experienced doctor can do that. The trick to diagnose this disease during MRI is to acquire images when the neck is flexed.

The exact cause behind this benign neurological disorder is not known yet. According to doctors, the slowly progressive disease is thought to be caused due to the movements in flexing the neck. Also, some doctors believe that this disorder is caused due to the inconsistency between the dural sac and vertebrae at a growing period or young age of the patient.

Now we know that Hirayama’s disease is a self-limited and asymmetrical disorder that stops progressing after 1-5 years. The method used to cure this disease includes preventing neck flexion by using a cervical collar to halt more progression. Specific treatment for this disorder is not invented yet. Currently, physiotherapy with the cervical collar is the most used method in the majority of cases to provide some relief to the discomfort caused by this disease. Although, this method will not slow down the progress of such conditions and the hand may become weaker and wasted. The application of this method at an early age of this disease showed a good response.

Some doctors also propose surgical intervention, but this option is used in sporadic cases. Surgery can provide relief by reducing the bending angle to prevent further damage to the spine. But again, 100 percent cure is still not guaranteed.

This self-limited disorder which is more common in young males has a slow progression. This disease is followed by muscle weakness and wasting in the hands and forearms. Neither pain is associated with this muscular disease, Nor sensory changes. As the spread of this disease is slow, it usually takes 3-9 years, followed by a halt and stabilization of symptoms and signs. Sometimes this disease can destabilize and its progression may continue after the age of 40. Also, according to research, this disorder can rarely progress to the opposite limb.