Diastematomyelia is a variant of spina bifida characterized by a split cord deformity caused by congenital spinal dysraphism. A collection of congenital malformations known as spinal dysraphism has its origins in the dorsum of the embryo. This disorder is likewise linked to diplomyelia, but with diplomyelia, the spinal cord is duplicated rather than split. A bony spur, cartilaginous ridge, or fibrous band runs down the middle of the spinal cord, separating the two ‘hemicords’ that are each encased in their dural tube.

In diastematomyelia, the cord is split in a direction that is either sagittal or longitudinal. The “splitting” mostly occurs entirely among the “hemicords” or only partially. The hemicord splits in the center, and the two halves then come together in the lower portion of the cord.

Effective therapy for diastematomyelia requires surgical decompression of neural components and excision of the bony spur. This is mostly done with or without removing the extra dural sacs and fixing them. 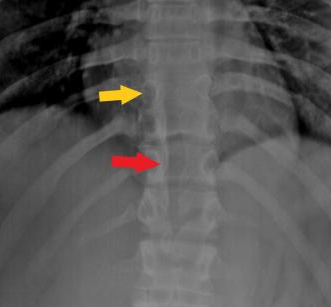 The majority of diastematomyelia patients exhibit symptoms, including tethered cord signs and symptoms, while people with mild type II are barely affected or completely asymptomatic.

Some of the symptoms include:

The problem’s intensity affects the indications and symptoms. The split cords typically reside in the same layer of tissue as the dura and arachnoid layers. However, other cords split despite having several sheaths. Studies show that females are more likely to be affected by this condition and that a fibrous or cartilaginous septum in the spinal cord is typically the cause of a split cord in the spinal column.

Since the cause of the issue’s growth is uncertain, it is referred to as a “dysraphic state.” Typically, diastematomyelia affects the spine between the ninth thoracic and first sacral segments. Most sacral pain originates from the lumbar spine, which is located higher up. The condition occurs seldom in the cervical region.

There are two common types of Diastematomyelia which are:

Surgical intervention is required immediately if the patient exhibits symptoms of the condition. This action is necessary to prevent the problem from getting any worse. Surgical treatment is contingent upon the appearance of the problem. Restoration of normal motor and other bodily functioning is the primary aim of the procedure.

Diastematomyelia is one of the most prevalent conditions for which decompression surgery is performed. This comprises the excision of the bony spur, as well as the repair or resection of the dural sac. This technique is mostly performed to help relieve the strain in the spinal cord that causes the patient discomfort.

It is also better for the patient’s family to get a second opinion and seek out other solutions to the issue. This is because the presentations of the disorders differ from patient to patient. This indicates that multiple treatment plans are involved. In certain circumstances, the manifestation is distinct and does not include only one or two attending physicians. This is done so that the patient’s best interests are prioritized by the team.