Our fingers are composed of 3 bones and five flexor tendon pulleys. The three bones are combinedly called phalanges and are separately named proximal, middle, and distal phalanges respectively. The proximal is the closest one to the wrist, and the distal is the farthest one. However, the pulleys are responsible for assisting tendons over the bones of the fingers. Flexor tendon pulleys named A1 through A5 function as ligamentous straps to keep the tendon connected with the phalanges. The function of these pulleys is similar to a pulley function of a crane that is capable of lifting loads. Out of all the pulleys, A2 and A4 are the most important ones and are commonly prone to trigger finger injury. Whereas, other pulleys are more flexible and are joined to the volar plate i.e. a ligament that binds two phalanges together.

Tendons are a framework that joins muscles to bones. When a hand is in motion, then the muscles of the forearm contract, and the flexor tendons of the fingers are pulled due to which the fingers can contract into a fist. If there is no pulley system in place supporting the tendons against the bone then the tendons would be jammed across the palms and they will not allow us to create a fist.

Bowstringing is a major disorder of trigger finger release that is caused by the malfunction of the digital pulleys (mainly the A2 pulley). When a flexor tendon is dislocated from the center of the metacarpophalangeal joint, the flexor’s mechanical advantage increases than the extensors as a result limited digital extension is seen. So to obtain an optimal line of pull for finger flexion, the tendons must stay close to the bone. This trigger finger disorder is very rare and has few complications after surgical treatments. 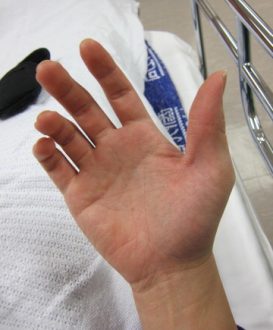 It is essential to first observe the symptoms of any flexor injury before consulting with any doctor. Therefore, some signs and symptoms are curated in the following list for evaluating the rare flexor injury i.e. Bowstringing of the Tendon.

These are some common symptoms that are rarely seen in any person that has bowstringing of tendon. This disorder is usually seen in rock climbers, baseball pitchers, and sports athletes. So, whenever you examine such symptoms then you must take the basic aid. But, if the symptoms are severe then immediately consult a good orthopedic doctor.

Commonly bowstringing of tendon takes place when the crucial pulleys i.e. A2, A3, and A4 are ruptured. Basically, our soft tissues are responsible to hold limited strength and tolerable load, and if the stress is beyond its bearable limit then the rupture of ligament, tendons, and pulleys takes place. The amount of bearable strength of pulleys depends on the following two factors.

If there’s bowstringing of the tendons, then more careful management of the injury must occur. This doesn’t always mean surgery is critical, but there are specialized splints and therapy techniques that may allow the pulleys to heal properly. Only in situations where there are multiple pulley ruptures or if there’s delayed treatment then in that case surgery becomes necessary.

As far as returning to activity, this varies significantly with the severity of the injury. With mild pulley strains, the complete activity is resumed as soon as swelling and pain have subsided. For full ruptures that are being treated non-surgically, the duration of treatment is often between one to three months; for those that require surgical re-creation of a pulley injury. Furthermore, there are also restrictions for up to a year from the time of surgery.