Angiomas or developmental venous anomalies (DVA) refer to a set of benign tumors derived from cells of the endothelium or the tissues surrounding these vessels. These tumors may be an indication of systemic problems such as liver disease. However, angiomas are usually not associated with malignancy. They represent the concept of functional and anomalous venous channels present in the brain parenchyma. Venous angioma is a kind of congenital variant of cerebral venous drainage. On imaging, angiomas are visible as several small-sized deep parenchymal veins that converge toward collecting veins. Venous angioma or DVA are usually not interrelated with any other vascular malformations harboring hemorrhage risks. However, separated or isolated DVA usually appears as benign lesions with a link demonstrable to seizures, headaches, or hemorrhage.

These angiomas most commonly occur either in the Frontoparietal morphea or cerebellar hemisphere. They exhibit a caput medusae sign of veins draining into a relatively large vein.

Generally, venous angiomas or developmental venous anomalies (DVAs) are asymptomatic and do not exhibit symptoms. For this reason, the majority of the people do not even know that they have developed one. However, the dilated vessel can cause a rare set of signs and symptoms itself. It may also create conditions that may lead to the formation of cavernous angiomas. Venous angiomas are not hereditary.

These can often show hemifacial spasms, seizure, aqueduct compression, and trigeminal neuralgia. In some affected individuals, thrombosis of the draining vein, non-hemorrhagic infarction, and bleeding. Even when there is evidence of bleeding, it is manageable both in mildly symptomatic patients and asymptomatic ones. Though the symptoms are rare, the most frequent signs and symptoms involve dizziness, headaches, focal neurological deficits, and seizures. Before the techniques like MRI and CT scans, these angiomas were known to be a rare cause of intracranial hemorrhage and seizures. 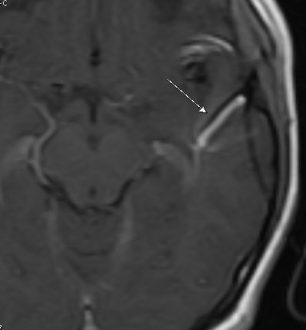 Developmental venous anomalies or venous angiomas are not hereditary but these anomalies are somewhat similar to that. These anomalies are congenital malformations of blood vessels, and a person is born with them. During this anomaly, the bunch of veins seems just like a palm tree.

DVAs are formed; from the focal arrest of the parenchymal vein development or occlusion of the medullary veins. These central nervous system anomalies are not something to bother. DVAs are usually benign, that is, non-dangerous and, people with this anomaly themselves do not know that they have them. DVAs in those cases are evident when doing imaging tests while looking out for other health problems.

These unusual vein formations can develop anywhere in the human body. However, the most common point of their occurrence is the spinal cord or brain. By several numbers estimates, a minimum of 1 person in 50 people has at least one DVA present inside the body.

Developmental venous anomalies or venous angiomas are asymptomatic and, for this reason, it is not easy to diagnose them. Angiomas can only be diagnosed when an individual has imaging tests to look into the cause of several other problems. The imaging tests may include MRI or MRA, conventional angiogram. These tests also include specific CT scans that show areas affected by the blood flow. The majority of the people are unaware that they have a DVA condition and it is only diagnosed after their death if an autopsy gets done.

However, DVA can also be diagnosed employing cerebral venous sinus thrombosis with collateral drainage. The other diagnostic methods of venous angiomas include Sturge-Weber syndrome and leptomeningeal angiomatosis. It is a demyelinating disease. Due to its demyelinating nature, it has also been known to enlarge medulla veins. However, it sometimes happens that the venous angiomas do not need any treatment to recover.

Usually, DVAs do not require any treatment. The veins work perfectly to let the blood flow in and out of the brain. For this reason, they do not need removal. Sometimes, affected individuals do not need to get imaging tests done over the long term.

However, sclerotherapy is the primary nonsurgical intervention for venous malformations. Large-sized lesions are cured; with the help of 95% ethanol. Whereas smaller and cutaneous lesions are treated with 1% sodium tetradecyl sulfate, often performed by a radiologist under anesthesia.

A few of the times, multiple sclero therapeutic sessions are too needed. The venous malformations usually have a propensity for recurrence and recanalization. An alternative has also been described to the standard sclerotherapy. The alternative medical treatment uses sclerosant foam. A retrospective study has discovered that sclerotherapy has been effective against venous malformations. It is when it is used with sodium tetradecyl sulfate foam. It then prevents both malformation size and pain.