What is Subluxing ulnar nerve?

The nerve can not function properly if it is dislocated. Subluxing Ulnar Nerve occurs when the ulnar nerve dislocates during extension and flexion of the elbow from its original position and moves over to the front of the medial epicondyle. This leads to snapping, which can be heard. The Subluxing Ulnar Nerve and Snapping Triceps Syndrome are two different conditions, although both are associated with the dislocation of the Ulnar Nerve.

For the Subluxing Ulnar Nerve Test, a provocative and neurological dysfunction test is performed. This test is known as the Elbow Flexion test. This test helps to identify the Cubital Tunnel Syndrome. The Cubital Tunnel Syndrome occurs due to pressure or stretching of the Ulnar nerve. This Ulnar nerve is also known as the funny bone nerve, which when hit causes hypoesthesia, pain and tingly sensation. The Elbow Flexion test consists of the following steps,

1. The patient is asked to either sit or stand.

2. The patient is asked to do full elbow flexion along with wrist extension with 90 degrees shoulder blade depression.

3. The patient is asked to hold this position for 3-5 minutes.

4. If there is a feeling of hypoesthesia and tingling in the elbow, the test is considered positive. 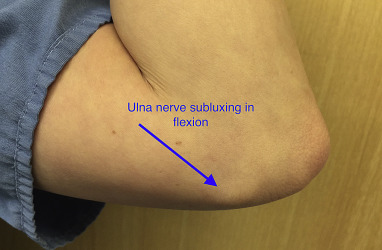 1. The patient should be asked to either sit or stand.

2. The elbow should be moved in flexion and extension.

3. The ulnar nerve over the medial epicondyle should be palpated.

4. On flexion, there will be a subluxation of the nerve with a palpable snap.

The feeling of numbness and tingling pain are the symptoms of the Subluxing Ulnar Nerve. Usually, these symptoms are present in the elbow, especially during flexion and extension because it causes tension and pressure on the ulnar nerve. So the kinesiology tape is used to relieve some of this tension and pressure. Take a kinesiology tape Y strip and remove the backing from the uncut region. Now put the tape on the backside of the bending elbow. With the elbow being flexed at 30 degrees put the Y side of the tape with little bit tension on the other side.

Now take another long and wide piece of tape and put it on the Y-side of the tape when the elbow is extended to secure it. This is done to provide extra mechanical support. There will be less tension in the elbow which indicates the successful tapping. This tapping can be kept for 3-5 days depending upon the workout or skin condition.

In the Subluxing ulnar nerve, the ulnar nerve behind the epicondyle moves back and forth from its original position. This subluxation leads to the palpable snapping, which is uncomfortable. The symptoms that are associated with the Subluxing Ulnar Nerve include hypoesthesia, pain, weakness, reduced gripping strength, sensitivity and tingling sensation that radiates between the medial one (small finger) and one half (ring finger) digits.

During the initial phase of the condition, non-surgical treatments can help to relieve the symptoms. Elbow brace should be worn to keep the arm straight, and persistent flexion of the elbow should be avoided. Ulnar Nerve Subluxation taping can be used for relieving the symptoms. The extent of compression and any nerve damage is studied through conduction velocity techniques to determine whether surgery is required or not. The surgical procedure is done in case of severe nerve compression, which is not improving.

The Subluxing Ulnar Nerve is similar to the Cubital Tunnel Syndrome in symptoms, but it also has an additional symptom of snapping of nerve. The surgery is done to bring the Ulnar Nerve to the front of the medial epicondyle. The post-op recovery takes several months, but the surgery relieves the symptoms of the Subluxing Ulnar Nerve. But in case of patients who had a long –term Subluxation ulnar nerve, they might develop persistent symptoms which may not relieve even after the surgery.