Read about Pharynx Function in Digestive and Respiratory System.

The digestive and respiratory system share some common spaces. The digestive system is composed of the mouth, pharynx, esophagus, stomach, small intestine, large intestine, rectum and anus. There are also a number of glands that lie outside the system that contribute to its function. These include the salivary glands, liver and pancreas.

The respiratory system is composed of the mouth or external nares, the pharynx, glottis, trachea, bronchi, bronchioles and alveoli. The latter three structures are in the lung. These two systems consider how the material moving through them is being altered. 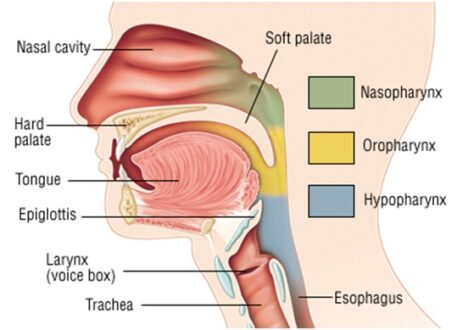 The human pharynx is the part of the throat situated immediately inferior to (below) the mouth and nasal cavity, and superior to the esophagus and larynx. The pharynx extends from the base of the skull down to the inferior border of the cricoid cartilage (around the C6 vertebral level), where it becomes continuous with the esophagus. Its superior aspect is related to the sphenoid and occipital bones and the posterior aspect to the para-vertebral fascia and muscles as well as the upper six cervical vertebrae.

It is a fibro-muscular tube lined by mucous membrane. The pharynx is the common channel for deglutition (swallowing) and respiration, and the food and air pathways cross each other in the pharynx. In the anesthetized patient, the passage of air through the pharynx is facilitated by extension of the neck.

The walls of the pharynx have both circular and longitudinal muscles;

The circular muscles form constrictions that help push food to the esophagus and prevent air from being swallowed. These consists of three constrictor muscles

The motor and most of the sensory supply to the pharynx is by way of the pharyngeal plexus, which, situated chiefly on the middle constrictor, is formed by the pharyngeal branches of the vagus and glossopharyngeal nerves and also by sympathetic nerve fibers.

The human pharynx is conventionally divided into three sections:

The pharynx is part of the digestive system and also the respiratory system; it is also important in vocalization.

Function of Pharynx in Digestive System

For the digestive system, its muscular walls function in the process of swallowing and it serves as a pathway for the movement of food from the mouth to the esophagus. After food is introduced into the mouth and is chewed, the tongue pushes it to the back of the throat to be swallowed.

The pharynx acts to push the food along by muscle contractions that trigger swallowing. Food then progresses to the esophagus, then to the stomach and through to the small intestine, where the majority of nutrition absorption takes place, before it passes to the large intestine.

Function of Pharynx in Respiratory System

The respiratory system (also referred to as the ventilator system) is a complex biological system comprised of several organs that facilitate the inhalation and exhalation of oxygen and carbon dioxide in living organisms (or, in other words, breathing).

As part of the respiratory system, it allows for the movement of air from the nose and mouth to the larynx in the process of breathing. Despite of the fact that majority of peopleconsider pharynx just as the throat. It resembles a funnel made out of muscles that acts as an intermediary between the nasal cavity, the larynx and esophagus.

The nasopharynx simply allows air to travel through it and reach the lower sections. The oropharynx does something similar, except it is located at the posterior of the oral cavity. Once the air reaches the laryngopharynx, a cartilaginous structure called the epiglottis will divert it to the larynx.

The epiglottis is a flap that performs a vital task, by switching access between the esophagus and trachea. This ensures that air will travel through the trachea, but that food which is swallowed and travels through the pharynx is diverted to the esophagus.