Circumvallate Papillae are also termed as “Vallate Papillae” and their numbers are varies from eight to twelve. It’s also possible that they are arranged in two rows and each of them has 1 to 2 mm projection of mucous membrane.

Tongue Examination is a routine physical checking used to diagnose different disease conditions. If you or your physician found anything on your tongue which is new or which appears not normal then it indicates that you have something wrong in your body. For instance, if your tongue is bulky-reddish, tender, and without coating, it indicates that you have a medical condition which is known as pernicious anaemia.

Tongue Swelling with reddishness and tenderness may arise in the tongue due to insufficiency of vitamin B12 or folic acid. Infection with Aspergillus niger is caused by chronic use of Penicillin, and it cause you tongue brownish or blackish with “hairy” growth without having any pain. In macroglossia, tongue becomes elevated.

Normal circumvallate Papillae, if you look at them very closely, they will appear as a short cone and base of the cone is attached with tongue upper surface. At the circular depression, the ducts of lingual salivary glands clear out their serous secretion and act as a moat. This secretion has very important function i.e. to wash out food debris from the circular depression that in turn cause the fresh taste stimuli. The location of circumvallate papillae is on the backside of the tongue and the terminal end of the tongue mainly responsible for the bitter taste. That’s why any unpalatable taste could be there due to presence of circumvallate papillae. Another important reason of their presence is to restrict swallowing of any poisonous substances as they have bad taste. 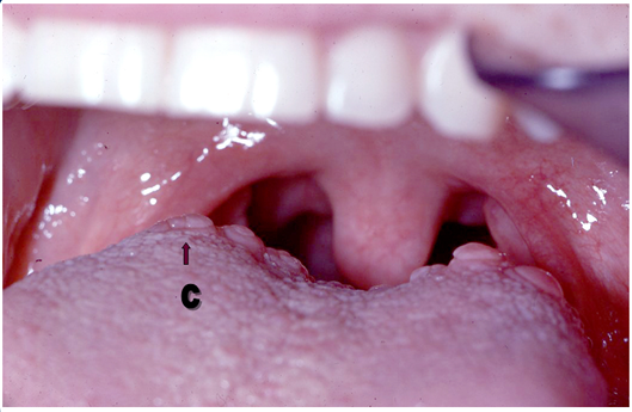 If you have found a strange v shape bumps at the backend of your tongue and you are worrying about it then keep reading to know more about it.

The circumvallate papillae are the largest papillae on the tongue. Most people have about six to 12 of these large bumps on the back of their tongue, arranged in an inverted v-shape, pointing towards the throat. Normally it is really hard to see them unless you stick your tongue all the way out and examine it in the mirror with good lighting. Like most of the papillae on the tongue, the circumvallate papillae are embedded with taste buds, which can be seen under high magnification.

Following are some causes that results in enlarged cicumvallate papillae incluViral infection:

If you have this medical condition then don’t worry, it’s not something that require your attention. Usually the enlargement is self treatable, but if you in any case, want to do something to accelerate the removal of the condition, then below are some remedies that may help to control the pain and may also reduce the enlargement.