Learn all about arachnoid granulations. It is named after Antonio Pacchioni, an Italian anatomist (1665-1726), who wrote extensively on the anatomy of the dura mater, published in 1705.

Arachnoid granulations normally measure a few millimeters. In some cases they grow to fill and dilate the dural sinuses even with expansion of the inner table of the skull and are then called “giant AG” 1. There is no consensus on the definition of “giant” in the literature. Sometimes large arachnoid granulations are called “giant” when larger than 1 cm. Most commonly AG is found in the transverse sinuses, particularly within the middle and lateral portions of the sinus, with a slight left predominance 6. The second most common location is the superior sagittal sinus, but they can be found everywhere in the dural venous sinuses 2, 4. There is no difference in sex distribution.

The arachnoid granulations often have a parasagittal location, leading to specific changes on the X-rays of the skull, such as the osteolytic lucency or the filling defect that appears at the level of the dural venous sinuses. Because of the latter modification, it is possible to mistake the arachnoid granulation for dural venous thrombosis. The MRI can be used for the identification of these small protrusions, with general signal characteristics for the cerebrospinal fluid. 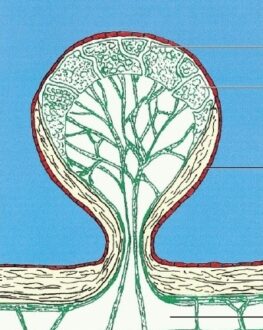 What is Arachnoid granulations

Arachnoid granulations, also known as a Pacchionian granulation, are projections of the arachnoid membrane (villi) into the dural sinuses that allow CSF entrance from the subarachnoid space into the venous system. These are small protrusions of the arachnoid mater (the thin second layer covering the brain) through the dura mater (the thick outer layer). They protrude into the venous sinuses of the brain, and allow cerebrospinal fluid (CSF) to exit the subarachnoid space and enter the blood stream.

The clinical significance of arachnoid granulations is uncertain. Most cases are usually asymptomatic and there are incidental findings on imaging studies, while some giant AGs may cause dural venous sinus pressure gradients and headache. In this case, the headache might be closely associated with multiple AGs. Imaging of giant arachnoid granulations is often suggestive of partial sinus occlusion.

The causes associated with arachnoid granulations are as under;

Arachnoid granulations treatment has been active debate about how to treat this condition. The need for treatment depends mostly upon the location and size of the villi whether it is small not disturbing surrounding tissue, and not causing symptoms, some doctors will refrain from treatment. Now with micro neurosurgical techniques and endoscopic tools that allow for minimally invasive surgery, more doctors are opting to surgically remove the membranes of the granulations or open them so its fluid can drain into the cerebrospinal fluid and be absorbed.

A patient with pseudo tumor cerebri syndrome who’s venography showed a giant arachnoid granulation in the left dominant transverse sinus and hypoplasia of the contralateral transverse sinus with high pressure proximal to the obstruction. Dilation of the left transverse sinuses with a stent reduced both the pressure gradient across the arachnoid granulation and the cerebral spinal fluid opening pressure with immediate symptomatic improvement, suggesting a causal relationship between venous outflow obstruction and pseudo tumor cerebri syndrome.