Tagrisso/osimertinib side effects, cost, dosage for lung cancer.Tagrisso is marketed by Astra Zeneca Pharmaceuticals based in Wilmington, Delaware.

Lung cancer is the leading cause of cancer death in the United States, with an estimated 221,200 new diagnoses and 158,040 deaths in 2015, according to the National Cancer Institute. The most common type of lung cancer, NSCLC occurs when cancer cells form in the tissues of the lung. The EGFR gene is a protein involved in the growth and spread of cancer cells. 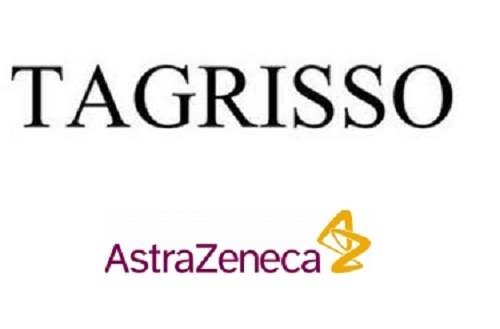 The most common side effects of Tagrisso are diarrhea, skin and nail conditions such as dry skin, rash and infection or redness around the fingernails. Tagrisso may cause serious side effects, including inflammation of the lungs and injury to the heart. It also may cause harm to a developing fetus.

The safety and efficacy of Tagrisso were demonstrated in two multicenter, single-arm studies involving a total of 411 patients with advanced EGFR T790M mutation-positive NSCLC whose disease worsened after treatment with an EGFR-blocking medication. In these two studies, 57 percent of patients in the first study and 61 percent of patients in the second study experienced a complete or partial reduction in their tumor size (known as objective response rate).