It is to be distinguished clinically from pterygium, which is a wedge shaped area of fibrosis that appears to grow into the cornea. These two conditions occur under similar conditions. However, they are thought to be separate diseases.

The pingueculum may grow over the cornea and block vision. When this happens, the growth is called a pterygium.A pinguecula forms on the sclera, the white portion of the eye, while a pterygia forms on the cornea or on the area that covers the iris. 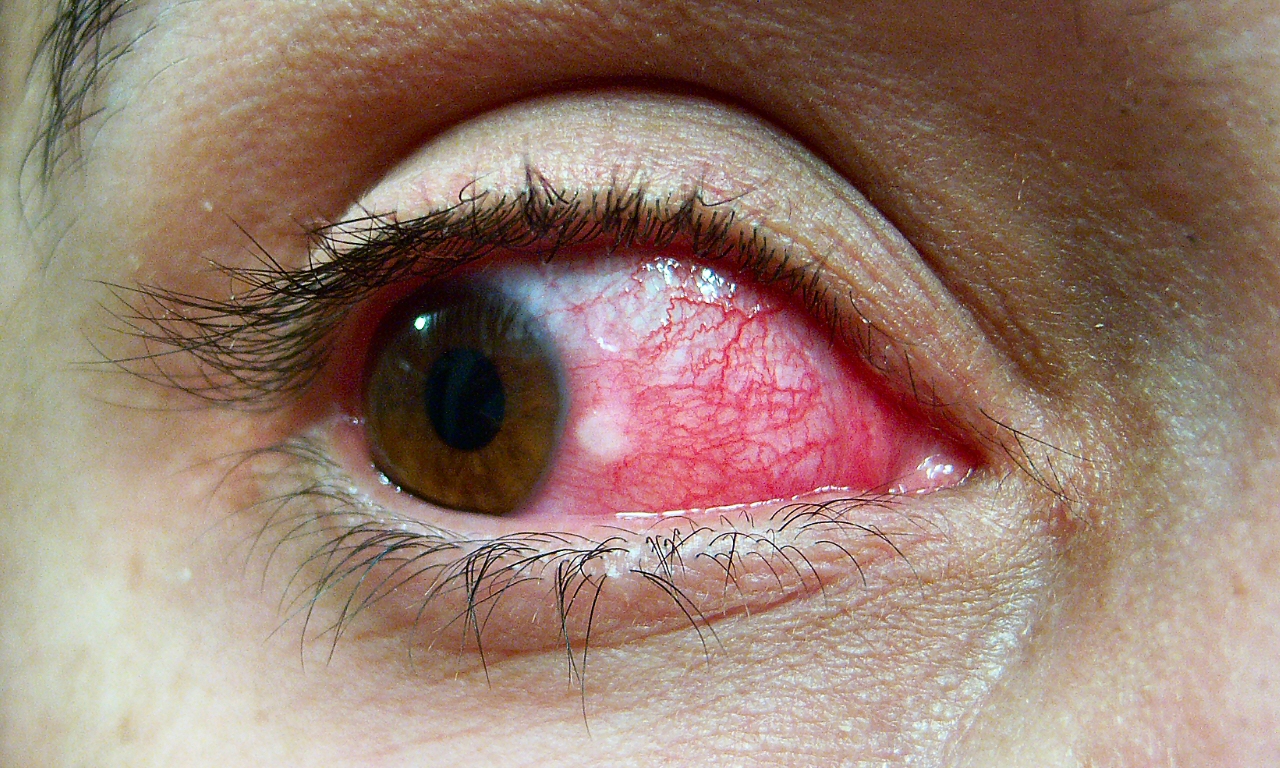 A pingueculum looks like a small, yellowish bump on the conjunctiva near the cornea. It can appear on either side of the cornea. However, it more often occurs on the nose or nasal side. The growth may increase in size over many years.In most people, pinguecula do not cause many symptoms. But when they do, those symptoms usually stem from a disruption of the tear film. Because a pinguecula is a raised bump on the eyeball, the natural tear film may not spread evenly across the surface of the eye around it, causing dryness. This can cause dry eye symptoms, such as a burning sensation, stinging, itching, blurred vision and foreign body sensation.

Another symptom of pinguecula is the appearance of extra blood vessels in the conjunctiva that covers the sclera, causing red eyes.In some cases, pinguecula can become swollen and inflamed. This is called pingueculitis. Irritation and eye redness from pingueculitis usually result from excessive exposure to sunlight, wind, dust or extremely dry conditions.

Ultraviolet radiation from the sun is the primary cause of the development of pinguecula, but frequent exposure to dust and wind also appear to be risk factors. Dry eye disease also may be a contributing factor and can promote the growth of pinguecula.

Pinguecula are more common in middle aged or older people who spend a lot of time in the sun. But they also can occur in younger people and even children especially those who are often outdoors without sunglasses or hats to protect their eyes from the sun’s UV rays.

Pinguecula treatment depends on how severe the symptoms are. It’s especially important for anyone with pinguecula to protect their eyes from the sun, since it’s the sun’s harmful UV rays that causes pinguecula to develop in the first place and encourages them to keep growing.

If a pinguecula is mild but accompanied by dry eye irritation or foreign body sensation, lubricating eye drops may be prescribed to relieve symptoms. Scleral contact lenses sometimes are prescribed to cover the growth, protecting it from some of the effects of dryness or potentially from further UV exposure.

Pinguecula also can lead to localized inflammation and swelling that is sometimes treated with steroid eye drops or non-steroidal anti-inflammatory drugs (NSAIDs). If dry eye is the cause of the pinguecula, eye drops formulated to treat dry eyes also may be prescribed.

Surgery is recommended if the condition does not improve with using medication, if the lesion changes in terms of its size, shape or even color or if the lesion starts to affect vision. However, if the pinguecula becomes a pterygium, or grows very large and does not respond to eye drops, a simple surgical procedure can be used to remove it.

Before any surgery begins, epinephrine and lidocaine are topically applied to the eye, ensuring that the patient does not feel anything while the surgery is being performed. After anchoring the eye using traction sutures, part of the conjunctiva is cut off using forceps and surgical scissors to allow access to the lesion. The pinguecula and other damaged tissues are removed, taking care that the cornea and semilunar fold are not damaged.

The actual process of removing the pinguecula is painless and quick. In most cases, procedure lasts no more than half an hour. Patients can choose to go home within several hours after the surgery is completed. An eye patch must be worn over the eye for at least a day or two to protect the eye while it is healing. The doctor may also prescribe contact lenses to be worn and taking medications for a week. Patients may return to their usual routine a day after it is removed.

Things you can do that may help prevent a pingueculum or keep the problem from getting worse include: