Crohn’s disease, also termed as Crohn’s syndrome is a type of inflammatory bowel disease.  Crohn’s disease may occur in any part of gastrointestinal.It causes inflammation of the  lining of digestive tract which may lead to wide variety of symptoms like abdominal pain,  diarrhea (which may be bloody if inflammation is severe),vomiting, or weight loss, anemia  and skin rashes.Inflammation caused by crohn’s disease may spread into deep layers of bowel  tissues which is very painful and debilitating condition and sometimes it may lead to  life threatening complications.Crohn’s disease is caused by interaction between environmental, infectious, immunolgical and genetic factors. 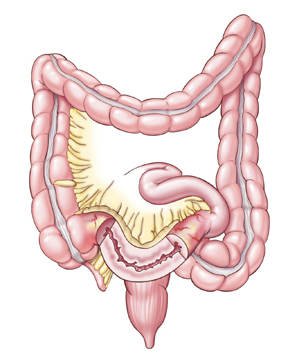 The exact cause of Crohn’s disease is still unknown but research has revealed that various factors may contribute  in the pathophysiology of Crohn’s disease. These factors include heredity factors, environmental factors, infectious agents and immunological factor.

Tests and Diagnosis of Crohn’s Disease

In order to confirm the diagnosis of crohn’s disease your doctor may suggest you one or more of the following tests and procedures:

Colonoscopy is routine diagnostic procedure recommended by gastroenterologists to help in diagnosis of various intestinal disorders including crohn’s disease.During  clonoscopy your doctor view your entire colon using thin and flexible tube with an attached camera.Some people have clusters of inflammatory cells present in the form granulomas which confirms the diagnosis of Crohn’s disease.

In this test barium containing enema is given to patient.The barium dye coats the lining of the bowel which allows your doctor to evaluate your large intestine with an X-ray.This test is now less common due to availability of CT-Scan and Colonoscopy.

Blood tests also help in the diagnosis of crohn’s disease.Blood tests includes erythrocyte sedimentation rate (ESR), Platelets count, leukocytes count etc.If patient is anemic and have high number of leukocytes it may indicates that patient is suffering from some kind of inflammatory disorder.

There is no cure for Crohn’s disease but severity and progress of disease can be reduced by some medications.In crohn’s disease combination of drugs is used like anti-inflammatory drugs, corticosteroids, immunosuppressants and antibiotics.