There is no clear definition of calyceal stones and how to treat them. Especially when the disease is in its advanced stages it is difficult to diagnose and intervene properly. Most cases of calyceal stone are asymptomatic. This makes it more confusing for healthcare professionals to devise a management plan for the patients.

Severe complications like ureteric colic are often associated with this disease when the stone migrates from its position. The composition of the stone and its size are the two main and important factors to consider when the treatment plan is prescribed. Ureteric coli prevalence is high in females as compared to men. Genetic history and history of kidney stones can also impact and lead to high chances of the disease.

The management approach for the calyceal stone should be decided based on the following factors: 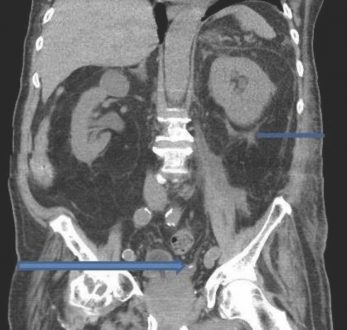 The patients who suffer from the calyceal stone will not show symptoms until the stone migrates to the ureter. The symptoms can be acute, moderate, or chronic. When the symptoms start to appear it is advised to consult your healthcare professional as soon as possible. These symptoms are common in patients with ureteral coli:

Deep flank pain will be caused if the stone travels to the ureteropelvic junction. The distension of the renal capsule can occur, which will lead to pain in the groin area. If the stone lies in the mid-ureter, then the pain is experienced on the anterior side. This can easily be confused with the symptoms of appendicitis if it’s on the right side.

Whereas, it can mimic the symptoms of diverticulitis if the pain radiates from the left side. So, the location of the calyceal stone is important to diagnose this condition.

The direct cause of calyceal stone is still not discovered. However, some factors need to be overlooked when diagnosing the patient with calyceal stones. If the body produces less than 1 liter of urine in a day, it might lead to calyceal stones.

Calyceal stone can also be observed in some premature infants. But probably the common age group to suffer calyceal stone is between 20 to 50 years old. Gender can also play an important role, as the majority of men are likely to face calyceal stone rather than females.

The risk factors of calyceal stones are as follows:

The calyceal stone size ranges from 15 to 20 mm. The size may increase with the progression of the disease. Usually, the calculi are formed by calcium stones. Uric acid and struvite stones are the other common types. Calculi are formed when there is the formation of crystals in the urine.

Low intake of fluids, excessive dehydration, urinary tract infections, and family history can lead to the aggressiveness of the disease. CT scan, ultrasound, and abdominal x-ray are used to diagnose calyceal stone. The gold standard test is a CT scan but in emergency conditions, ultrasound will be the best and prompt choice.

Some patients need to avoid radiation like pregnant ladies, so in those cases, ultrasound will be a good diagnostic approach. The size of the calyceal stone is the major factor to determine the treatment strategy.

As the calyceal stones are asymptomatic, so there is no need to treat the condition immediately. Although the risk of progression will increase when patients wait for a long time to get the treatment started. ESWL sessions are the best and long-term approach to treat calyceal stones.

An immediate surgical approach should not be considered. All types of calyceal stones cannot be treated with ESWL. There is the lower success rate with the obese patients or who have unhealthy body mass rate. Anticoagulation therapy is contraindicated during calyceal stone treatment.

For chronic and acute pain, analgesics will be given. NSAIDs and Opioids are considered for treating pain. If the pain does not subside then hospitalization will be required.