Ungual fibroma is also known as Koenen tumor, Parungual fibromas or Periungual fibroma. It is a medical condition that refers to the development of flesh-colored papules; in or around the region of the nail bed. There may be two categories of this anomaly, that is, periungual or subungual. In the case of periungual fibroma, the papules develop under the proximal nail fold, while in the case of subungual one, they tend to originate under the nail plate. Multiple ungual fibromas appear as smooth, firm, skin-colored reddish papules. Ungual fibromas associated with TSC are known as Koenen tumors. TSC refers to tuberous sclerosis complex, a multi-system and rare genetic disease responsible for the growth of benign tumors in the brain or other organs such as the heart, eyes, kidneys, lungs, and skin. TSC-related ungual fibromas occur in 20% of the patients. Such fibromas are usually asymptomatic but may sometimes also cause pain and deformity.

In individuals with the condition of TSC, tumors are frequently present with several firm skin-coloured to red-coloured nodules emanating from the proximal skin beneath the nail and, more often from the proximal nail fold. The fibromas often develop past puberty and increase over time. The most common site of their occurrence is the toenails rather than the fingernails. Fibromas are generally 5 to 10 mm long but can also grow occasionally to even larger sizes. These may become painful, disfiguring or/and incapacitating. Nearly half of post-puberty individuals with TSC have KTs. However, individuals with KTs lacking the condition of tuberous sclerosis are present with a single lesion in the nail bed. The tumor may also be present at the site where it was removed by performing surgery. Some rare individuals also have had a history of crushing trauma at the sites; that developed KTs later. TSC is also related to the angiofibroma second category. 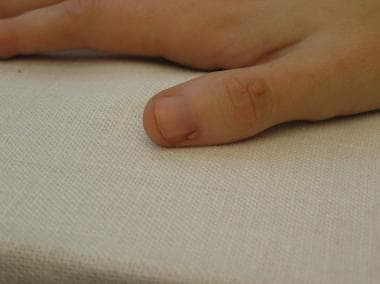 The ungual or periungual fibromas are usually rare and noncancerous dermatologic lesions. These lesions or papules are associated or acquired with TSC or tuberous sclerosis; however, it is also related; to von Recklinghausen’s disease. In cases with no association to TSC, KTs develop as a body’s response to traumas locally.

In cases associated with TSC, KTs appear due to the loss-of-function mutations. It is either the two paired TSC1 or one of the two paired TSC2 suppressor genes where they occur. These two suppressor genes, in turn, act and suppress the abnormal growth of cells by contributing to the suppression of the mammalian target of rapamycin or mTOR. The mTOR is a protein responsible for the promotion of proliferation and cell growth. The inactivation of any one of the suppressor genes is held accountable for unleashing mTOR. It then encourages the development of several benign lesions including, KTs as well.

The diagnosis of ungual fibromas is usual while the patient or individual gets examined for some other problem. It is, however, also diagnosed when the lesions themselves are a cosmetic concern. They usually have typical features from a clinical point of view and are diagnosed based upon the physical examination by dermatologists. However, if the lesions are not apparent clinically, histological examination is required. Histological investigation depicts hyperkeratosis and acanthosis with a large number of fibroblasts and dermal capillaries. In the case of the KTs, the microscopic histopathological analyses reveal the same. It involves the thickening of the skin, a condition known as epidermal acanthosis in medical terms. The histopathological investigations also involve thickening of the outermost layer of the epidermis or hyperkeratosis. In addition to that, typical skin features of angiofibroma, ectatic blood vessels and star or spindle-shaped fibroblasts in a dense collagen connective tissue background are also clearly seen.

The treatment of KTs varies depending upon their numbers, size, symptoms, locations, damage to tissues and disfiguring effects. Excision, however, may also be the treatment of choice for surgically accessible lesions. After the surgical removal, KTs have a high local rate of recurrence, specifically in cases not involving the complete removal of the lesions. Other treatments involve; carbon-dioxide based laser vaporization, shave excision of the tumor, and electrocauterization. Later, treatment of the proximal paronychia with phenol is performed, eradicating the root of the tumor. However, in patients with the condition of tuberous sclerosis, rapamycin solution is applied topically.

Later treatment methods preserve the nail matrix and nail plate, ideal for younger patients having a few tumors; it is because the tumors may leave a normal-appearing nail. Ungual fibromas are not a threat to the health of an individual affected; it is even then essential to consider their treatment and eradication.