There are several signs and symptoms associated with middle lobe syndrome. However, some of the most common symptoms exhibited by the affected individuals include a recurrent or chronic cough. It is essential to mention that this symptom is visible in approximately 30 to 50% of the patients.
Other symptoms of it include shortness of breath or dyspnea, audible wheezing, and pain in the chest. It also mentions fever and chills in relevance to obstructive pneumonia. The abovementioned symptoms are sometimes recurrent and sporadic. The history for repeated treatments of this syndrome may also include asthma or recurrent pneumonia.

The ratio of the existence; of middle lobe syndrome of females to males usually ranges between 1.5 to 3. However, it is essential to mention that this syndrome is unrecognized in clinical practice. For this reason, sometimes, identifying the constellations of its symptoms and signs; may be a challenge from a diagnostic point of view. 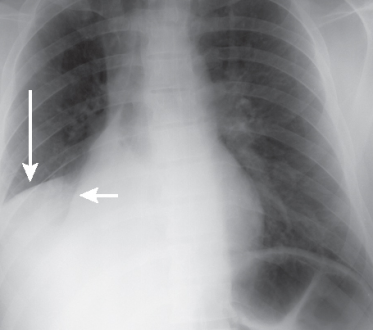 Several causes are known to cause the collapse of the middle right lobe of the lungs. The etiology of the above-mentioned two categories of this syndrome is not the same. The obstructive middle lobe syndrome arises from extrinsic compression of the right middle lobe bronchus. This compression results due to the existence of tumors or peribronchial lymphadenopathy. The extrinsic compressions involve primary lung cancers, hamartomas, a plethora of tumors, and sometimes distant metastasis. However, another common etiology of the syndrome includes mucus plugs, aspiration, sarcoidosis, and broncholiths.

The initial evaluation or diagnosis of the syndrome may include a lateral view chest X-ray. However, sometimes there may also be an exhibition of plain films in patients with recurrent pneumonia, which is normal.

An evaluation based upon radiography may also imply. However, it will never lead to the underlying cause of the syndrome. Total blood count, bronchoscopy or/and CT(computed tomography) chest are some medical methods used to help further in elucidating the actual disease process behind. Another diagnosis of it is the right heart border obscured in both AP or PA projections.

The treatment or management of this syndrome is of vital significance. Whether the case is related to the obstructive category or a non-obstructive one, the central focus is identifying the underlying disease process. The agents are focused on the optimization of pulmonary function. These agents include antibiotics, chest physiotherapy, mucolytics, and bronchodilators. The abovementioned list of agents benefits nearly all the patients irrespective of the type of syndrome they show.