Hamman-rich Syndrome refers to an acute and rapidly progressing pulmonary disease. During the 1935 year, Louis Hamman and Arnold Rich explained it for the first time and called it meteoric interstitial fibrosis associated with the lungs. However, later in 1986, Katzenstein used the terminology of AIP to distinguish it from the category of chronic interstitial fluid. This syndrome is more commonly known as Acute interstitial pneumonia or AIP.

The signs and symptoms of this syndrome include fever and highly productive cough, and spitting out of thick mucus. As a result, an affected individual may also experience shortness of breath. The patient sometimes also experiences a state of fatigue and myalgia. Its signs and symptoms may also include tachypnoea, dyspnoea, crackles, wheezes, and cyanosis. However, these signs and symptoms sometimes recur for approximately one or two weeks before medical attention. When the person feels fluid, it indicates that the affected individual may experience a feeling similar to drowning. The breathing difficulties lead to the incapability of breathing without any support. 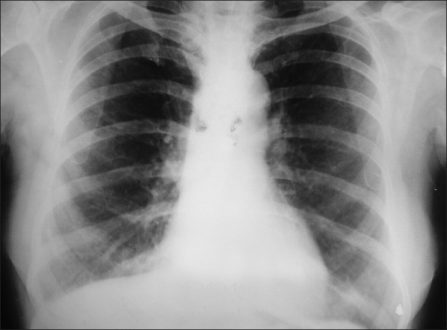 In the Hamman-rich syndrome, the long-term exposure of your pulmonary portion may cause toxins and other pollutants to damage your respiratory system. These may include grain dust, silica dust, asbestos-containing fibers, droppings of birds and animals, radiation treatments, and indoor hot tubs. However, sometimes the cause of this syndrome is the follow-up of lung cancer or breast cancer therapy. Some people may later show signs exhibiting damage to the lungs. Some antibiotics, heart medications, and inflammatory drugs may also cause this syndrome.

Once an individual exhibits the signs and symptoms associated with the Hamman-rich syndrome, diagnostic procedures are accompanied to confirm the presence of this kind of pneumonia. The prime feature of this syndrome is the progression from the initial signs and symptoms to respiratory failure.

However, for diagnostic purposes, the X-ray technique is used. An X-ray must show ARDS, fluid inside the alveoli in the pair of lungs). In addition to that, a biopsy of lungs exhibiting damage of diffuse alveoli is also a requirement. If a diffuse damage alveolus is visible, the diagnosis is easy to perform.

There may be various other tests in the field of medicine which help in the diagnosis of the Hamman-rich syndrome. For instance, the use of blood cultures or blood work to aid in the diagnosis. For the diagnosis, the bronchoalveolar lavage method is used. BAL is a procedure that is done during a bronchoscopy.

Acute interstitial pneumonia or Hamman-rich syndrome is treated along with the supportive care. In the treatment of this syndrome, mechanical ventilation is acquired. The same methods are usually used for ARDS including a relatively low tidal volume ventilation. Corticosteroid therapy is used; however, there is no effectiveness related to that in particular.

The rate of mortality is greater than 60%. As a result of which many affected individuals die within the six months of presenting symptoms. The death is due to the failure of the respiratory system. There is always a probability of the re-occurrence of the disease, since the treatment is only temporary.

However, there is a described method of lung transplant known to be effective against this syndrome.

The Hamman-rich syndrome occurs among individuals; older than forty years. There are no risks concerned with this syndrome.