Laryngotracheobronchitis is the most common pediatric illness that causes acute stridor, accounting for approximately 15% of annual clinic and emergency department visits for pediatric respiratory tract infections. Croup is primarily a disease of infants and toddlers, with an age peak incidence of age 6 months to 36 months (3 years). In North America, incidence peaks in the second year of life, with an incidence of about 5-6 cases per 100 toddlers. Although uncommon after age 6 years, croup may be diagnosed in the preteen and adolescent years, and rarely in adults.

The symptoms result from upper-airway obstruction due to generalised inflammation and oedema of the airways. At the cellular level this progresses to necrosis and shedding of the epithelium. The narrowed subglottic region is responsible for the symptoms of seal-like barky cough, stridor (from increased airflow turbulence), and sternal/intercostal indrawing. If the upper-airway obstruction worsens, respiratory failure can result, leading to asynchronous chest and abdominal wall motion, fatigue, hypoxia, and hypercarbia.

The aim of treatment is to maintain a patent airway and provide adequate gas exchange. Medical management includes bronchodilating medications, corticosteroids, nebulized adrenaline, cool mist in a croup tent during sleep, and intravenous hydration if oral intake is inadequate. Oxygen may be used, but it masks cyanosis, which signals impending airway obstruction. Sedation is contraindicated because it may depress respirations or mask restlessness, which indicate a worsening condition. Sponge baths may be needed to control temperatures above 102°F. You may need to isolate the child if the physician suspects syncytial virus or Para influenza infections. 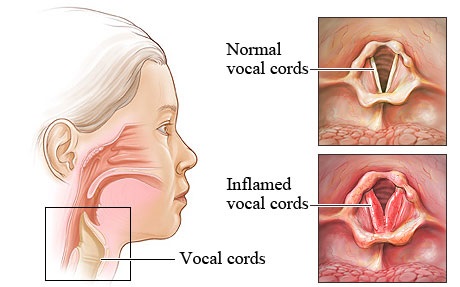 Laryngotracheobronchitis (LTB) is an inflammation and obstruction of the larynx, trachea, and major bronchi of children. In small children, the air passages in the lungs are smaller than those of adults, making them more susceptible to obstruction by edema and spasm. Laryngotracheobronchitis refers to an infection of the upper airway, which obstructs breathing and causes a characteristic barking cough.

Later on in the course of the condition they may develop symptoms of upper airway obstruction which include:

More than 85% of LTB cases are caused by a virus. Parainfluenza 1, 2, and 3 viruses; respiratory syncytial virus; Mycoplasma pneumoniae; and rhinoviruses are the most common causes. The measles virus or bacterial infections such as pertussis and diphtheria are occasionally the cause. Epiglottitis, a life-threatening emergency caused by acute inflammation of the epiglottis and surrounding area, differs from LTB because it usually results from infection with the bacteria Haemophilus influenzae type B.

Other infectious causes for croup-like illnesses include the following:

·         Retropharyngeal abscess (abscess behind the tissues of the pharynx)

·         Bacterial tracheitis (inflammation of the trachea)

The infection causes inflammation of the larynx, trachea, bronchi, bronchioles, and lung parenchyma. Obstruction caused by swelling and inflammatory exudates develops and becomes pronounced in the subglottic region. Obstruction increases the work of breathing; rarely, tiring results in hypercapnia. Atelectasis may occur concurrently if the bronchioles become obstructed.

Laryngotracheobronchitis treatment includes analgesics and antipyretics e.g. paracetamol, this is to reduce the child’s distress due to pain or fever.

·         Adrenaline is useful in children with severe croup and respiratory failure. Adrenaline helps to improve the child’s symptoms immediately, but it doesn’t have any long term benefits.

·         Oral steroids are given to all children with croup they help to reduce the severity of a child’s symptoms and the duration of illness.

Glucocorticoids to further reduce and keep down inflammatory swelling have been found to be highly effective in decreasing the need for hospital admission of such children; they may be given by inhalation, orally or intravenously.