Kounis syndrome, also known as allergic angina, is a collection of coronary symptoms, including concomitant chest pain, brought on by mast cell mobilization as a result of sensitivity or a strong immunological reaction to a chemical or combination of drugs. The Kounis syndrome is quite uncommon. This disorder is defined as a severe coronary condition caused by an adversely responsive reaction or a strong resistance to a substance such as a drug or extra substance (side effects include chest pain associated with decreased blood flow to the heart).

Numerous things can set off an attack, such as adverse drug reactions, contact with radiological contrast medium, bee stings, shellfish, and coronary stents. Kounis syndrome includes other arterial systems with comparable physiologies to those of the coronary arteries, such as the mesenteric and cerebral circulation. 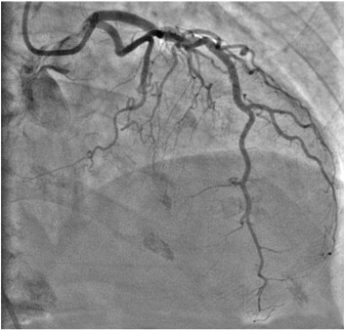 Kounis syndrome is defined by a collection of signs that appear as either vasospastic or non-vasospastic ischemia as a result of a hypersensitive response. The acute coronary symptoms of Kounis syndrome include coronary spasm, abrupt myocardial infarction, and stent thrombosis, which are induced by allergy or anaphylactic assaults.

People who have Kounis syndrome face significant dangers and problems as a result of the difficulty in diagnosing their condition. This condition can progress to significant problems if it is either not addressed or the diagnosis is delayed. Depending on how severe the illness is, these risks and symptoms might range from minor to life-threatening. The following are some of the signs of this disease:

ECG abnormalities that are more common in people with Kounis Syndrome include the following:

To confirm the diagnosis, tests such as serum tryptase and histamine, immunoglobulin, cardia troponins, cardiac enzymes, etc. are also performed. SPECT is one example of a more recent diagnostic technology that is also used for diagnosing this disease.

Although the true etiology of Kounis syndrome is unknown, allergic reactions and immune system reactions to vaccination medications or vaccines are the most common causes. The following factors can lead to this allergic disease:

Elimination of the allergen that causes Kounis syndrome is followed by management of acute coronary vasospasm and allergy treatment. While treating the acute situation, it is necessary to select medications with caution and use them to prevent the release of more histamine and the worsening of coronary vasospasm.

Beta-lactam antibiotics are one of the drugs that are linked to Kounis syndrome.  When treating myocardial infection-related acute chest pain, opiates including morphine, codeine, and meperidine are mostly administered with great caution. Thus, the prognosis for the patient with Kounis syndrome depends on factors such as the patient’s sensitivity, exposure to allergens, the severity of the initial allergic reaction, and environmental factors, as well as the condition’s variability.