Rapidly progressing glomerulonephritis, or RPGN, is another name for pauci immune glomerulonephritis. It is a sickness involving the kidney and is defined by the rapid decrease of renal function. In situations with at least fifty percent or seventy-five percent of glomeruli, a crescent-shaped glomerular structure is also observable. Kidney biopsies reveal the presence of glomerular formation. RGPN is classified into three categories depending on the immunofluorescence patterns. 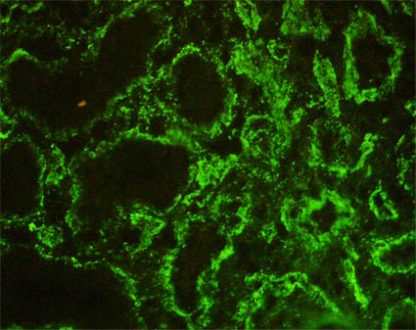 Pauci Immune Glomerulonephritis is a type of acute nephritic syndrome that is characterized by the formation of microscopic crescents in the glomeruli and leads to renal failure in a matter of weeks or months.

Some symptoms and indicators point to the existence of this illness. A symptom that is observed across all RPGN subtypes is a quick and severe decline in renal function. Several more symptoms resulting from the kidney’s failure to operate correctly are; hematuria, proteinuria, and blood deposits in the urine.

A healthy adult has proteinuria levels below 150 mg per day. Proteinuria in the nephrotic range is defined by values that surpass 3 gms per day. Occasionally, those who suffer from this illness also develop edema and elevated blood pressure. However, substantial anuria or oliguria is another sign of the disease’s severity.

Symptoms often develop gradually and also include lethargy, exhaustion, temperature, vomiting, anorexia, arthralgia, and stomach discomfort. Symptoms also occur in children. Some patients exhibit symptoms that are comparable to those of post infectious glomerulonephritis, such as hematuria that begins suddenly. Acute influenza-like sickness and edema are seen in around half of the patients within four weeks of renal failure onset.

Pauci Immune Glomerulonephritis is caused by several important factors. Sometimes the cause of this sickness is unknown. This condition has the potential to run in families. Some medical disorders cause pauci immune glomerulonephritis.

Viruses, such as HIV, are a possible cause of this condition. There is a correlation between bacterial endocarditis and glomerulonephritis, however, it is not apparent how exactly it is correlated. Nephritis is occasionally brought on by the consequences of a skin disease or strep throat inflammation.

This condition is also known to be caused by some immunological disorders. Lupus, nephropathy, and Goodpasture’s syndrome are a few examples. Occasionally, polyarteritis and granulomatosis contribute to the onset of this condition. Pauci immune glomerulonephritis can occasionally also be linked to illnesses including focal segmental glomerulosclerosis, elevated blood pressure, and diabetic nephropathy.

Glucocorticoids are advised as the first line of treatment, along with rituximab, plasmapheresis, or none. If renal function is rapidly declining or there is severe renal dysfunction at the moment of presentation, plasmapheresis is recommended. The treatment is based on the etiology of the associated condition, and it is carried out by that.

To avoid the degradation of the filtering unit, pauci immune glomerulonephritis treatments try to reduce swelling of the very first level of the glomerulus. Pauci immunological glomerulonephritis is frequently treated with corticosteroids. These anti-inflammatory substances have an impact on numerous bodily tissues and are non-specific. Children respond to treatment better than adults do. The management of renal failure eventually needs a kidney transplant or dialysis.

Excess weight, hyperglycemia, restlessness, the deterioration of the bones, as well as bruises, and skin thinning, are a few of the adverse effects of corticosteroids. This condition is treated in stages and a progressive fashion. The standard induction therapy for this illness is clearly described. These treatments include cyclophosphamide (CYC) for at least three months as well as a tapering of corticosteroids. It follows mycophenolate mofetil and azathioprine-based maintenance immunosuppression lasting up to 2 years.

Pauci-immune glomerulonephritis, despite significant advances, remains a multifactorial disease with a high death and morbidity rate. Kidney impairment is one of the most hazardous aspects of this glomerulonephritis. In addition to the treatment that the patients are receiving, there are a few things that they need to do to keep their health in good standing. Low-fat, limited salt foods make up a renal disease diet. This helps in maintaining control over the blood pressure, which decreases the disorder’s development.