A lentigo refers to a flat pigment or slightly raised lesion having a clearly defined edge. A lentigo is quite similar to a small-sized lentil and is distinguishable from freckle or ephelis as it does not disappear during the winter season. There are various kinds of lentigo observed in individuals. For instance; solar lentigo, PUVA lentigo, lentigo simplex etc. The plural term is mentioned; as lentigines or lentigos.

Lentigines are usually not associated with any gender or age. For this reason, it may affect both males and females irrespective of their age. Out of various categories of lentigos, ink spot lentigo is also the one. Inkspot lentigo is also known as a reticulated lentigo. Such lentigos are few as compared to the solar lentigos; these follow sunburn in individuals with a very fair skin complexion. Lentigos appear as dark brown to black irregular macules similar to an inkspot.

A lentigo is characterized; by its asymmetry, irregular border, or color that may be black or red. The diameter is greater than 6 mm. Its size, shape, and color vary. However, the symptoms of an ink spot lentigo are more specific. Its clinical manifestations include a reticulated, solitary black macule with a beaded or wiry, irregular outline, and a black ink resembling a spot on the skin. Its size is often less than 5 mm and it is most commonly visible in areas of the skin that have exposure to the sun; with the trunk that is the most common site of their occurrence. However, there are some other observations also associated with this medical condition. There are solar-lentigines and actinic keratoses visible in the surrounding areas. In addition to keratoses and lentigines, there are also some solar-induced freckles that an affected individual may experience. These symptoms are understood well by the observer. 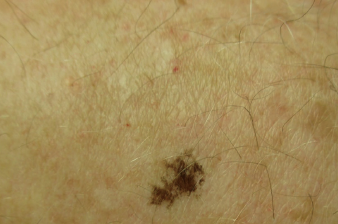 The foremost cause of any lentigo is the exposure of the human body to UV radiation. Individuals spending most of their time outside are at an increased risk of developing this condition. Many other causes are also associated with an ink spot lentigo formation. It includes multiple sunburns, tan burns and, fair skin also account for an ink spot lentigo or lentigines development. People with a history of radiation therapy or phototherapy also sometimes develop ink spot lentigos on their skin. However, this medical condition is not associated with any age group or gender. Several times this condition is also caused by a few inherited syndromes.

An ink spot was first described; as a benign melanotic macular lesion by Bolognia. The clinical and dermoscopic features of this condition are peculiar.

Its diagnosis is a clinical one; it is achieved by dermoscopy. Its dermoscopic findings are reported; to show a reticular pattern and is monomorphic. A lentigo of this kind appears with a characteristic spider-like wiry outline or beaded. However, a skin biopsy is occasionally warranted; if there is a doubt in the diagnosis of this lentigo. The differential diagnosis of an ink spot lentigo involves dysplastic nevus, solar lentigo, ephelides (freckle), and flat seborrheic keratosis. A history of an increased rate of shape, size, and color is a characteristic of melanoma.

An ink spot lentigo can be bothersome and it is particularly true if the lesion appears in an exposed area due to the sun exposure. This condition is usually asymptomatic and benign. For this reason, the treatment is based on cosmesis.

The strategies which help in the removal of this medical condition include most commonly laser excision and very less often, intense pulsed light or laser surgery. Another follow-up schedule should include the avoidance of sun during hours of peak ultraviolet intensity, that is, 11 AM to 4 PM. The fair-skinned individuals should also use broad-spectrum sunscreens and protective clothing while going outside. It will help to reduce the probability of the appearance of any new lesion formed earlier. Dermatologists may recommend the affected individuals medications such as bleaching creams consisting of retinoids, chemical peels, or hydroquinone. Laser and intense pulse light therapy also aid in the destruction of the melanocytes.