A lentigo is a sharp, little circumcised, pigmented macule surrounded by normal skin. Individuals with lentigo may exhibit histologic findings that may involve increased basal layer pigmentation and hyperplasia of the epidermis. There are various types of lentigo depending upon the cause and where they appear on the human body. It may include lentigo simplex, ink spot lentigo, tanning bed lentigo, radiation lentigo, PUVA lentigo etc. Out of many different types of lentigo, solar lentigo is also the one.

Solar lentigo, sun-induced freckle or senile lentigo, refers to a harmless patch of darkened skin. Solar lentigo is associated with the sun, as the name indicates. It is due to the exposure of skin to ultraviolet or UV radiation. It causes local proliferation of melanocytes and melanin accumulation within the skin cells or keratinocytes. Solar lentigos are very common; however, these are more common in people 40 years of age or above.

The condition of lentigo leads towards the appearance of flat spots on the human body. These flat spots are of a black, brown, or tan color. Sometimes, uneven or rounded edges are also visible in this medical condition.

Solar lentigo typically appears in areas subjected to artificial or natural ultraviolet light. These sunlight-caused lentigos are light brown to black and have well-defined spots. However, in affected individuals treated earlier with any form of UV light, these lentigos may also occur in those areas of skin with no exposure to the UV light. These spots are characterized by other kinds of lentigos as there is a slightly increased pigmentation. These dark spots are darker than freckles. Their shape is round to oval; the size of each lentigo varies from the other. These are most commonly present in areas exposed to the sun majority of the time. Those areas include arms, upper trunk, hands, scalp, and face. 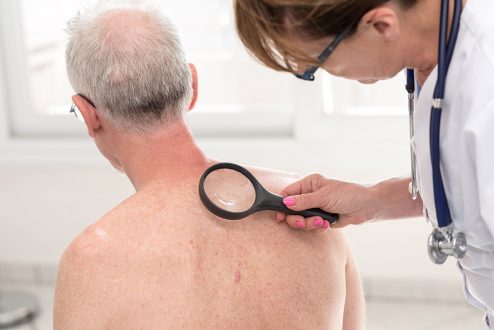 The cause of the development of; a solar lentigo is exposure to sunlight or ultraviolet or UV radiation in particular. The pigment deposition is; a response to the injury, analogous to a scar developing due to the cut. This pigment then collects in injured areas; due to greater sun exposure or thin skin. The probability of a lentigo occurrence is more in the individuals having fair skin, sunburns, and tan indoors. Other factors responsible for this medical condition include; higher exposure to the sun, having radiation therapy or phototherapy in the early stages. The causes are not only physical for these dark pigmented patches. But, in a few cases, this condition may come into being due to the affected individual receiving it from any inherited syndrome. People of all ages and genders are susceptible to this condition. However, it is more common in individuals above 40 years of age.

Dermoscopy refers to the evaluation of the surface of the skin. While assessing the skin using dermoscopy, pigmented skin lesions are covered; with any liquid such as alcohol or oil, followed by a specific optical system. The sole purpose of using dermoscopy is to aid accurately in identifying lesions with a likelihood of being malignant, that is, basal cell carcinoma or melanoma. Dermoscopy also enables us to assist in distinguishing such lesions from benign ones, mimicking these cancers clinically.

A solar lentigo is a solar-induced macule with elongated ridges, solar elastosis, and melanocytes. Melanocytes are responsible for the production of melanin. This category of lentigos can also evolve into seborrhoeic keratosis. The findings of the solar lentigos under dermoscopy exhibit faint pigmented fingerprint structures, network or uniform pigmentation.

Dermoscopy is sensitive from 60% to 100%, depending upon several factors such as the experience level of the examiners and diagnostic complications of the evaluated lesions.

Lentigos of any type do not need any treatment. However, many affected individuals may go for lightening the solar lentigos. To serve this purpose, the dermatologist might suggest either of the treatments.

The dermatologist may recommend bleaching creams containing retinoids or hydroquinone, chemical peels, intense pulse light, or laser. If these lentigos are left untreated, these will most likely tend to persist indefinitely. Techniques such as laser surgery and cryotherapy can also destroy them. However, there is one drawback associated with these techniques. That drawback involves temporary or permanent dark or white mark.

However, to prevent lentigo from developing, try avoiding sun exposure during the peak hours between 10 a.m. to 2 p.m. If there is any need to go outside in the sun, wearing sunscreen is a must with UVA/UVB protection. With that, putting on sun-protective clothing and a wide-brimmed hat is also significant.