During this medical condition, the compression of the third and final portion of the duodenum occurs between the overlying superior mesenteric artery and the abdominal aorta. Wilkie’s syndrome is a potentially life-threatening and rare syndrome. This condition is also known; by various names such as cast syndrome, intermittent arterio-mesenteric occlusion, chronic duodenal ileus, or mesenteric root syndrome. SMA is distinguishable from a nutcracker syndrome which is the inveiglement of the left renal vein between the SMA and the abdominal aorta. However, the diagnosis is possible with both of these conditions. This syndrome is a rare cause of upper gastrointestinal obstruction.

The signs and symptoms of Wilkie’s syndrome include epigastric discomfort and pain. This discomfort and pain are followed by vomiting, nausea, early satiety and, extreme postprandial abdominal pain due to the compensatory reversed peristalsis and duodenal compression. Other symptoms of SMA include heartburn, reflux, tenderness or external hypersensitivity of the abdominal area, burping, and abdominal distortion or distention. These symptoms worsen and are severe as the disease progresses over time with the disturbance in electrolytes with weight loss and fluid inside the human body. 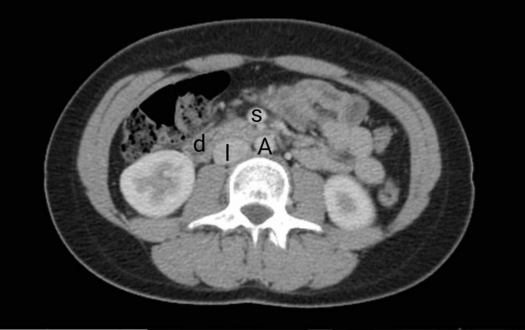 In newborns, poor weight gain and difficulties while feeding is also frequent. Sometimes, individuals with this disorder may also develop severe malnutrition and spontaneous wasting. The chronic form of Wilkie’s syndrome also exhibits symptoms such as fear of eating. The SMA may be mimicked by a set of other conditions as well. Those conditions include chronic pancreatitis, peptic ulcer, systemic lupus erythematosus, and mesenteric ischemia.

Wilkie’s syndrome is triggered; by any condition that involves a narrow mesenteric angle and an insubstantial cushion. The syndrome may exist in either chronic or congenital and induced or acute forms.

Individuals with chronic Wilkie’s syndrome predominantly have a lifelong history of abdominal problems having intermittent exacerbations relying on the extent of duodenal compression. The risk factors associated with the chronic syndrome are asthenic body build or an unusual high insertion of the duodenum region at the Treitz ligament.

An acute SMA syndrome is caused right after traumatic incidents. It hyperextends the superior mesenteric artery across the duodenum, involving sudden weight loss and obstruction. Causes include left nephrectomy, ileoanal pouch surgery, scoliosis surgery, and prolonged supine bed rest. It is significant to mention that while the SMA syndrome may seem similar to an eating disorder, the differentiation of the two conditions is essential as any misdiagnosis in such a condition can be threatening.

According to recent studies, 70% of cases can be treated by following a medical treatment, whereas the remaining ones need to be treated; with surgical treatment.

In case of the failure or non-feasibility of the medical treatment, there is a need for surgical intervention. Duodenojejunostomy is the most common operation for Wilkie’s syndrome proposed by Bloodgood in 1907. It is performed; as either open surgery or laparoscopy. Duodenojejunostomy includes an anastomosis creation between the jejunum and duodenum, bypassing the AA and SMA caused compression.

Other less common surgical treatments to eradicate this medical condition includes transposition of the SMA, intestinal derotation, anterior transposition of the third portion of the duodenum, and division of the ligament of Treitz (Strong’s operation). In some cases of this syndrome, the disorder may be a life-threatening condition similar to AIDS or cancer. In such cases, the treatment may lead to the prevention of symptoms and increased life.

A 1 in 3 mortality rate has been reported for this syndrome, as stated by a few sources. However, after research and data establishment, this mortality rate has most likely vanished. Two recent studies of individuals affected with this syndrome; one published during 2006 considering 22 cases and the other during 2012 considering 80, showed mortality rates of 0% and 6.3%, respectively. According to one doctor who was a part of one of the studies, the expected outcome for cast syndrome treatment is declared excellent.

For another case series consisting of five patients, health, social and emotional status improved with improvement in the bothering signs and symptoms associated with this syndrome. The life expectancy of the patients improves with the application of conservative medical treatment and nutritional rehabilitation, the least risky treatment, and successful option.