Learn all about hemophobia test, symptoms, causes, facts and treatment. Do you feel squeamish when you get a sight of someone bleeding? If that is the case, you are not alone. Thousands of people have the same anxiety and fear triggered by the sight of blood. This is known as hemophobia.

Hemophobia is a word derived from Greek word “haima” which means blood. Hemophobia is signified by extreme fear and nervousness of getting a sight of blood. This may be a bleeding wound, blood of animals or even a thought or picture may develop instant discomfort and anxiety.

Most of the times, hemophobia co-occurs with trypanophobia (fear of needles) as people might be scared of any needles due to the fear of bleeding.

Hemophobia or fear of blood is diagnosed on the basis of the diagnostic criteria set by American Psychiatric Association in Statistical Manual of Mental Disorders. The manual works as a standard to help doctors in determining the condition of patients. It is also used as a standard by insurance companies

A person suffering from hemophobia or fear of blood is gradually exposed to his fears in a planned manner. Level of exposure is increased with time until a person feels confident enough to face his fears. Some other treatments options include hypnosis, periodic discussions, behavioural therapy etc. All these therapies are known to have positive impact on mind and health. Doctors also encourage hemophobic patients to face their fears instead to avoiding them. 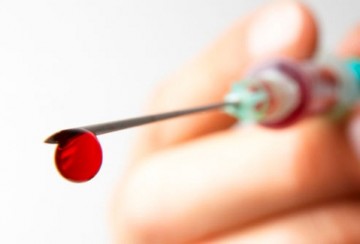 Hemophobia is an abnormal and persistent fear of blood. Sufferers of this very common phobia dread the sight of their own blood, the sight of the blood of another person or an animal, and sometimes printed or filmed images of blood or even thoughts of blood. Blood may remind them of their own vulnerability to injury and of the eventuality of death. Some sufferers of hemophobia experience a typical phobic reaction characterized by an increase in blood pressure and heart rate. Other sufferers experience an atypical phobic reaction characterized by a decrease in blood pressure and heart rate, causing paleness and weakness. They may even faint. Those with the latter reaction may develop a new fear: the fear of fainting.

Hemophobia can have psychosomatic symptoms, such as fainting, and may even provoke physical symptoms (e.g. elevated blood pressure), which could result in nosebleeds, a case of the fear causing the thing that is feared. Sufferers may experience:

Persons afflicted with Hemophobia had traumatic experiences with blood during childhood or adolescence. Hemophobia is often related to other phobias. Trypanophobia, or fear of medical needles, is sometimes associated with hemophobia. Some people with a fear of blood also have other medical phobias, such as fears of doctors and dentists. The field of medicine is popularly associated with gruesome images of spilled blood, particularly in television and movies, which may help to perpetuate such phobias. Hemophobia may also be associated with health phobias including hypochondriasis and nosophobia.

Bleeding is an indication that something is wrong with the body, and the sight of one’s own blood can be enough to trigger health anxiety. In those who experience mysophobia or fear of germs, the sight of someone else’s blood can trigger fears of catching a disease. In some cases, the fear of blood may be related to the fear of death. Hemophobia may be caused by a previous negative experience with blood. Those who have been through a traumatic injury or illness that caused a major loss of blood may be at increased risk. However, hemophobia may be inherited or even be rooted in evolutionary factors.

Most fears and phobias, including the Phobia and Fear of Blood, are not serious especially if they do not seriously impact your normal daily life. But if your phobia and fear of blood results in avoiding situations on a regular basis preventing you from functioning or enjoying life you should consider seeking medical advice. The fear of blood can be very real for the person experiencing it, and it is an important thing to bring up with medical care providers. People such as phlebotomists appreciate being told when a patient has a fear of blood, as they can adjust their routine to accommodate the patient, or provide the patient with tips which may lessen the severity of the phobic response. Patients should never be embarrassed about discussing their fear of blood before a procedure starts, and asking that it be noted in their charts.

Hemophobia treatment methods respond very well. One of the most common is cognitive-behavioral therapy. You will learn to replace your fearful self-talk with healthier responses to the sight of blood. You will also learn new behaviors and coping strategies. If your phobia is severe, medications can help control the anxiety, allowing you to focus on treatment strategies. Other forms of talk therapy, hypnosis, and even alternative treatments may also be helpful. A skilled therapist can guide you through the process of recovery, which can be difficult or impossible on your own. With help, though, there is no reason for hemophobia to control your life.