If you or your loved ones are suffering from breathlessness and rapid heart rate you immediately need to consult a physician. Because you may be a victim of Anisocytosis, a medical condition affecting blood cells. Below in this article you will find useful information about Anisocytosis, its causes, symptoms and treatment for early diagnosis of this medical condition.

Anisocytosis is a medical condition in which the red blood cells present different sizes. This normally happens when the patient suffers from Anemia, Thalassemia or any other disorder of blood cells. It is diagnosed through blood testing. The name Anisocytosis comes from two different words, “aniso” meaning “unequal”, and “cytosis” which has a reference to cells.

Erythropoiesis (development of RBCs) begins in red bone marrow. Erythropoietin hormone secreted by kidneys stimulates red bone marrow for production of RBCs and maturation factors such as vitamin B12, folic acid and iron facilitate to mature the RBCs. In anisocytosis, the RBCs are under developed and its most common causes are given below: 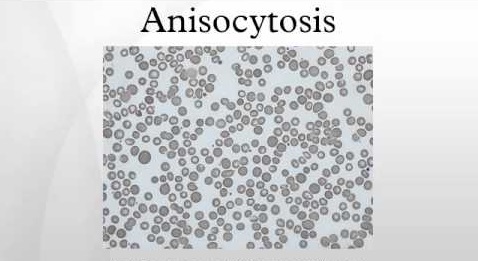 Folic acid is essential for synthesis of DNA. Deficiency of folic acid leads to abnormal and immature DNA and therefore leads to failure of nuclear maturation and difference in RBCs size.

Like iron Vitamin B12 is another vital component that body requires to make red blood cells. Lack of Vitamin B12 leads to decreased production of red blood cells causing pernicious anaemia. This can ultimately give rise to Anisocytosis.

Myelodysplastic Syndrome give rise to abnormalities in the bone marrow and blood and results in the formation of uneven sized blood cells. This is also a condition causing Anisocytosis.

Lack of Vitamin A

Vitamin A is an important nutrient required by the body to fight against diseases. Lack of Vitamin A also results in irregular size of the red blood cells.

Blood transfusion can be a main cause behind Anisocytosis and a lot care may be needed during the process. A test should be performed to ensure whether the size of the red blood cells in the transfused blood is same as that present in the body. However, Anisocytosis caused by blood transfusion is temporary in nature.

Tiredness and exhaustion are the notable features of anisocytosis. Patient easily gets tired even with slight exertion and has less energy to perform routine activities.

People affected from anisocytosis usually have an obvious paleness of skin. The paleness can mostly be seen nail beds and eye balls.

Anisocytosis condition is quite common with anemia and heart failure. So it is better to consult a doctor and perform the appropriate test to detect Anisocytosis. If you see the above symptoms it is important to perform a detailed assessment through Microscopic analysis of the red blood cells, Blood smear and Red blood cell distribution width.

Anisocytosis generally involves no life risks. Yet, the situation causes a lot of physical distress and may lead to other complicated disorders. so its better to seek treatment as soon as the symptoms are noted.