Learn all about Urticaria (hives) Causes, Treatment, Sign and Symptoms!

Urticaria also referred as hives, is defined as local reddening of the skin which itches intensely and presently due to some allergic reaction.In some cases urticaria is associated with non allergic mechanism triggered by some physical and emotional factors.Severity of urticaria depends upon the cause of disease but in many cases the condition may be temporary and goes away within minutes or a few hours.Only in few cases it becomes chronic and lasts for long period of time.Majority of chronic hives or urticaria have unknown cause(idiopathic urticaria) and lasts longer than six weeks.It is believed 30-40% of chronic urticaria cases are associated with immune system due to which they cannot be cure completely but they can be managed with certain medications. 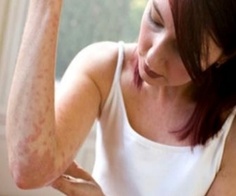 Here are some commonly reported sign and symptoms of  Urticaria.

Some common drugs that are involved in the skin hypersensitivity reaction are aspirin, penicillins, cephalosporins and tetracyclines. Inhaled protein substances that may Cause the reaction of urticaria include pollens, molds, the dust from feathers,house dust and animal dander.

The Insect stings that may cause hives or urticaria are those of of hornets, wasps, and bees.The underlying cause of hypersensitivity due to insect sting is that person is sensitive sensitive to the Substance which the insect Injects into his skin. It was strongly believed that  number of urticaria cases are due to food allergy or any of the ingredient present in it but now it is revealed that food allergy is the  cause of few cases of urticaria but not so many.

They widely used in skin allergies like urticaria, skin rashes and in insect bite.They block the production of inflammatory mediator called as histamine by inhibiting H2 receptors that’s why they are also termed as H2 receptor antagonists.Some commonly used ant-histamines are given below