Retrorectal cystic hamartoma which is often known as tailgut cyst is a rare abnormality that develops in the retrorectal space. According to the clinical studies they arise from the embryonic hindgut.

Sometimes they are diagnosed during routine examination but mostly the majority of the patients show symptoms of tailgut cyst. This condition is often misdiagnosed, so MRI is considered a modality of choice to get clear images.

The diagnosis of tailgut cyst is often divided into these types; congenital, inflammatory, neurogenic, osseous, and miscellaneous. The patient is diagnosed according to their medical history, histopathological features of the cyst, and lab investigations.

Middeldorpf in 1885, presented the first case of retrorectal cyst. A rectal duplication cyst was seen in a 1-year-old girl, and Middeldorpf discovered that these cysts originate from the tailgut. Tailgut cyst occurrence from female to male ratio is 3:1 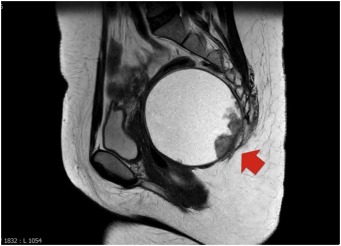 Tailgut cyst is located in perirectal and perianal locations. Anteriorly the rectorectal space is bound by the mesorectum whereas posteriorly it is attached to the sacrum. Peritoneal reflection forms the superior border while on the other hand, the inferior border is developed as rectosacral fascia.

The middle sacral, loose connective tissue, haemorrhoidal vessels, and branches of sympathetic and parasympathetic nervous systems are part of this rectosacral space. Tailgut cyst arises from the embryonic hindgut, embryologically. The embryo possesses a true tail of 8 mm in size, during the human development phases.

According to a hypothesis, when tailgut remnants fail to regress, this might lead to tailgut cysts. No direct correlation was found between the patient’s age and the development of the cyst. It is rarely found near the subcutaneous tissue. Tailgut cysts can be felt or diagnosed when patients undergo pelvic examination.

But mostly the diagnosis is delayed because other symptoms indicate other health issues. So investigation and diagnosis of tailgut cyst is a daunting task.

The major symptoms a patient experience, when they have a tailgut cyst are as follows:

The duration of the symptoms is usually between 6 to 7 months. Sometimes tailgut cyst is asymptomatic, so patients who go for a rectal or pelvic exam tend to find out about the lesions or cyst.

Colonoscopy is helpful if the patient presents with the symptoms of rectal bleeding. Moreover, the integrity of the layers of the rectum can be visually seen through transrectal ultrasound. But the multiplanar imaging ability of MRI aids in identifying the cyst rapidly.

Although tailgut cyst is a benign congenital disease, it can transition to cancer if not treated or diagnosed properly. There are a variety of epithelia between different cysts or it can be the same cyst as well. These include transitive, squamous cell carcinoma, and mucinous. Now the question is how it becomes malignant?

Well, the answer is simple that fistulas and infections can be a major consequence of cancer. Squamous carcinoma, adenocarcinoma, sarcoma, and endometrioid carcinoma are the common types of malignancies. Tailgut cancer can also be caused due to hormone imbalance. Ghrelin and estrogen are responsible for the development and progression of tailgut cysts in cancer.

However, the pathogenesis of malignant tailgut cancer is not crystal clear. There are chances that malignant tumor cells might leak during a biopsy in the peritoneal cavity which would lead to cancer. So, the vital diagnosis tools are CT scans and MRI.

The size of the lesion is a big factor when choosing the surgical approaches to remove the tailgut cyst. In any case, perioperative bowel preparation is necessary. All patients should be educated and marked for the stoma. The treatment of choice in tailgut cyst is complete surgical removal.

However, there are some new surgical approaches as well, which include Transanal minimally invasive surgery(TAMIS). It is minimal invasive excision of the benign cyst. For posterior rectal submucosal lesions, Transanal endoscopic microsurgery (TEM) is a safe option. In female patients, small lesions can be treated with a transvaginal procedure.

Another viable option is laparoscopic surgery, however, it should not be considered if there is a doubt of malignancy due to seeding effects of the tumor cells. Although this condition is rare, its pathology can lead to severe morbidity. Tailgut malignancy symptoms should not be ignored and treated with a proper treatment plan.