Although stomach ulcer is more common in older men above 50 years, it is some times a young women or child may also suffer from stomach ulcer.

Stomach Ulcer Symptoms in Children are hard to understand because, kids simply call it “belly pain”. While it may actually be something more serious like ulcer. Whether it is peptic or gastric ulcer, the pain is no different for a child. 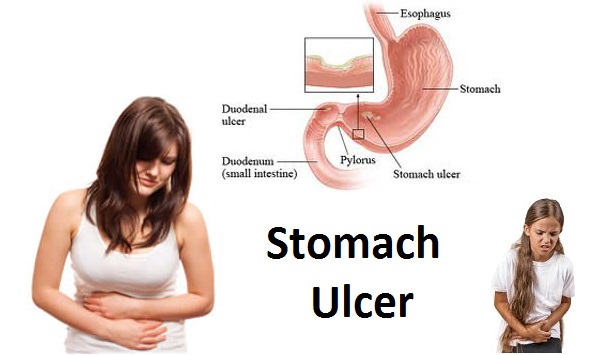 Stomach Ulcer Symptoms may include variety of pain in the stomach with constipation, diarrhea or appendicitis. However, stomach ulcer pain is often confused with other digestive disorders that can cause stomach pains. A bacteria called Helicobacter Pylori is the most known Stomach Ulcer Cause through H. Pylori Infection.

However, Stomach Ulcer in Children is not as common as it is with adults men and women. Stomach ulcer in children may be developed as a secondary condition from more serious medical conditions or because of adverse reaction with NSAIDs such as aspirin and ibuprofen. Stomach ulcer symptoms in children are also different from adults. So before the child’s condition become worse, we, a child’s abdominal pain should be diagnosed that whether it is ulcer or a different kind of abdominal condition.

Following are the common stomach ulcer symptoms in men, women and sometimes in children also:

Stomach Ulcer Treatment is different for kids and adults. Stomach ulcer treatment is children is determined by the following factors:

Once it is determined that you or your kid is suffering from stomach ulcer due to H. pylori infection, it is very important to take the medications prescribed by the doctor, which are most commonly antibiotics. Even if the stomach ulcer symptoms are not obvious anymore, you still cannot be sure unless all of the medicines/antibiotics are taken.

On the other hand, if it was a medication-related ulcer, it is best to avoid nonsteroidal anti-inflammatory (NSAID) drugs as they can aggravate the ulcer. The doctor may also prescribe acid-reducing medicines.

Unless patient has a pre-existing allergy to a certain food, most doctors do not suggest any dietary restrictions, but a good diet should be observed. Junk food and other food or drinks that stimulate the body’s production of acid such as coffee and soda should be avoided. An increase in Vitamin E consumption is also helpful in treating ulcer. Some food are also good for minimizing the risk of ulcer like banana, honey, garlic, cabbage, licorice and capsaicin.