Lymph nodes refer to the small bean-shaped structure constituting the body’s immune system, protecting the human body from various microorganisms. The function of these nodes is to filter those substances that travel through the lymphatic fluid. The lymph nodes contain white blood cells or lymphocytes. These lymphocytes present in the lymph nodes are usually responsible for the defense of the body against disease and infection.

From an anatomical point of view, hilus or hilum means a fissure or depression where nerves and blood vessels kind of structures enter the organs. It allows the transportation of materials throughout the human body.

It may be caused; by infections such as mycoplasma, tuberculosis, histoplasmosis, and coccidioidomycosis. It may also be caused; by heart failure and sarcoidosis. Other causes include; inorganic dust diseases such as silicosis and berylliosis. It may be due to the result of malignancy, that is, carcinoma or lymphoma. Few individuals also report developing enlargement of this lymph node due to the consumption of drugs.

In unexplained conditions, imaging studies, tissue biopsy, and laboratory tests are recommended in identifying if any enlarged hilar lymph node is visible or not. However, imaging can easily recognize the distribution and size of the lymph node way more accurately than any examination method. Ultrasound is a non-invasive method to assess these nodes. 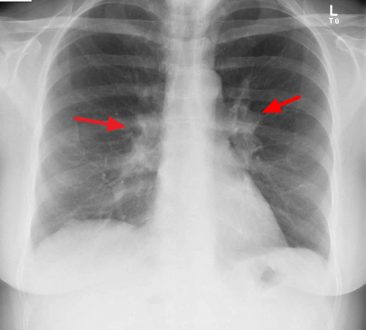 Hilar lymph nodes are present immediately adjacent to the main-stem bronchus and hilar vessels, including the main pulmonary artery and the proximal region of the pulmonary veins present. The hilum region is visible in between the fifth and seventh thoracic vertebrae of the spine. However, the puncture sites for the lower right hilar lymph nodes are at the anterior or lateral wall of the bronchus intermedius at a position about the 12 or 3 o’clock position. It is usually at the level of the right middle lobe orifice or somewhat near to it.

Metastasis refers to the state of the body when the cancerous cells begin to spread from the place where they get formed first to some other part of the body. The cancer cells tear apart from the original tumor and travel through the lymph system or blood during metastasis. As a result of which, new tumors are formed; in other organs or tissues.

The enlargement of the right hilar lymph node may turn into a metastatic one. Metastatic lymph nodes mean those lymph nodes that contain cancer that has spread somewhere from the human body. The patients who develop the unknown primary cancer constitute about 0.5 to 3.3% among all cancer patients. Greager et al. observed that the most common site of cancer was the lymph nodes. The lymph node locations were axillary(4.2%), cervical(15.1%), supraclavicular(9.1%) and inguinal(2.8%) regions. However, the cases of carcinoma being detected only in hilar lymph nodes or mediastinal nodes are rare.

Calcification refers to the accumulation of calcium salts in body tissue. It usually occurs in bone formation; however, it sometimes deposits in the soft tissue abnormally, causing it to harden. Calcifications occur in nearly all cells. Similarly, the calcifications are also associated with the lymph nodes.

The calcification of the right hilar lymph nodes most often result from prior granulomatous infections. It is due to histoplasmosis and tuberculosis. The other reasons include silicosis, amyloidosis, sarcoidosis, and calcifications are secondary to the lymphomas treatment. The treatment involves chemotherapy or radiation therapy. However, the question of a patient having lymph node calcifications made it more specific. These involved lymph nodes of various chains include a few of them presenting eggshell calcifications.

The radiological findings of these calcifications are usually small nodules. These nodules are typically located in the upper lung regions and posterior that their dissemination may also occur through the lungs.