RDW means Red blood cell Distribution Width. The RDW blood test can calculate the sizes of red blood cell count in a sample of blood, and normally an RDW test is performed as a part of a CBC test, which means complete blood count. Different types of hematology analyzer instruments are sometimes used to measure red cell distribution width. These are

RDW-CV: It is called RDW-CV when reported as coefficient of variation (CV)

RDW-SD: It is called RDW-SD when reported as standard deviation (SD)
Usually red blood cells are a standard size of about 6-8 μm in diameter. A normal RDW is 11.6 to 14.6%. 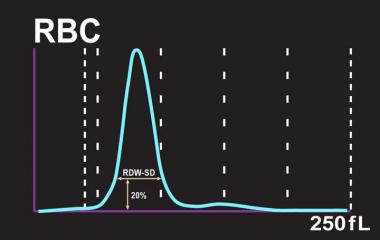 Doctors can use RDW counts in attempting to predict mortality, particularly in patients with cancer or cardiovascular disease. Following are the detailed RDW test results explained:

Certain disorders, however, cause a significant variation in cell size. Higher RDW values indicate greater variation in size. If you have noticed RDW high, this may indicate different things as well. Your RDW high, which is above 14.5%, means that your red cells vary a lot in size.

This may happen due to many different reasons, and to identify the issue, it is important to make a comparison to the MCV or mean corpuscular volume, which is the average amount of space each red cell occupies in your blood sample. Here is the relation between results of RDW and MCV:

If you have this on your lab work, it could indicate anemia caused by a chronic disease, heterozygous thalassemia, or hemoglobin E trait.

This can be a bit more serious, depending upon the condition: You might have aplastic anemia or chronic liver disease. The use of antivirals, alcohol or chemotherapy can also prompt this result in your blood work.

Just because the numbers are “normal” doesn’t mean that all is well. On the contrary, a normal number for both of these can indicate anemia of chronic disease, anemia of renal disease, acute blood loss or hemolysis.

If both numbers are high, you might be looking at a wide variety of potential problems, including immune hemolytic anemia, myelodysplastic syndrome, or a significant folate or vitamin B12 deficiency. Chronic liver disease can also cause this, as can cytoxic chemotherapy.

Sickle cell anemia and iron deficiencies can be indicated by this combination of factors. In order to determine more clearly what the problem is, more detailed testing will have to be done. Another cause of a high RDW level and a low MCV level is thalassemia intermedia. Thalassemia intermedia is another type of blood disorder in which there is impaired production of one or more of the elements that make up hemoglobin.

These numbers can be associated with a wide variety of conditions. These include sickle cell disease, chronic liver disease or myelodysplastic syndrome. Other problems might include early stages of folate, vitamin B12 or iron deficiency. It might also mean you have dimorphic anemia, which is a marked iron or folate deficiency, just to name a few of the problems that can cause dimorphic anemia.

Patients who have a higher level of RDW may have more overall risks to their health than patients with lower RDW values.

Use of RDW Test

In most cases, the RDW can help determine several points about your health, from your chances of developing an iron deficiency to different types of anemia that you may be suffering from. The RDW is most helpful in alerting your doctor to the fact that there is a problem, which will then prompt him or her to call for further tests that will provide more detailed results.

These blood cell counts are usually part of a normal, routine blood work that your doctor might use to determine your general overall health and possibly pinpoint any issues that might be causing adverse symptoms. Keep in mind that no matter what the RDW indicates, further tests are always necessary to help determine exactly what is wrong and how it should be treated.

Share
Previous Pain in Lower Left Abdomen Symptoms, Causes, Treatments
Next How to Get Rid of Pityriasis Rosea Naturally with Home Remedies