A jaw cyst that originates from a periodontal ligament and is caused due to inflammation is called a radicular cyst. The apex of the tooth is involved in the radicular cyst. It is considered the common form of jaw cyst. 68% of the cases of jaw cysts are relevant to the mandible.

The most common factor considered to cause a radicular cyst is caries. Traumatic injuries to the teeth can also result in the cyst of jaws. There was a steep rise in the cases of radicular cysts in the third decade. The frequency of radicular cyst in females is generally lower than in males. The primary reason is due to the stringent care they ensure regarding oral health.

Radicular cyst grows slowly until there is an infection. Proper treatment should be considered to treat the cyst. If it is left untreated it may lead to infection. The symptoms of infection can be catered, with the usage of antibiotics. Find out more about a radicular cyst in this article! Don’t skip the page.

A radicular cyst is symptomless initially. It progresses to the next stages slowly. Swelling and pain are caused by the infection. A round protrusion that is hard is formed at first. Swelling will occur within a few days. Later, the fluid is accumulated under the cyst.

When this is not treated timely, the infection will occur which leads to inflammation and dental caries. Necrosis of the pulp is caused by inflammation. Expansion of bones and displacement of roots are the common signs and symptoms of the advanced stages of the radicular cyst.

The affected tooth will lose color, hence causing discoloration. Electric and ice tests will have negative results for the patients suffering from the radicular cyst. Lymphadenopathy can be experienced by the surrounding tissues. Maxillary sinus erosion is one of the common complications of the cyst. The percussion test will lead to shooting pain in the teeth especially the affected ones. 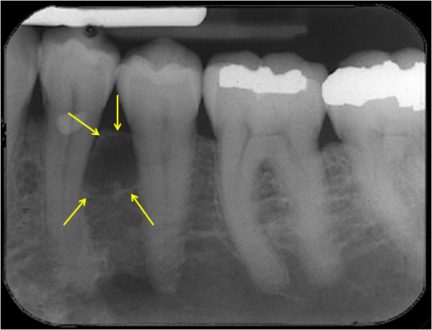 The infection of the roots leading to tooth decay is the most common cause of radicular cyst or any other cyst of the jaw. When dental caries is not treated, the bacteria accumulates and reaches the pulp of the affected tooth. As a result, infection is caused.

The infection travels to the roots of the teeth because it accesses the periapical region. So, the necrosis will lead to the proliferation of the epithelial layer and toxins will be released causing more damage. Radicular cyst inflammation will be caused when the normal immune system of the body attacks the main source responsible.

Osmotic tension is created when the proteins pile up at the infection site leading the cyst to enlarge in size. The excess pressure on the bone can lead to the increased size of the cyst. This is called resorption. The release of toxins is one of the common reasons for resorption.

The expansion of cysts might be due to two reasons. One can be the normal response to inflammation and the other will be the interleukin and prostaglandin reaction.

OPGs are frequently used to identify radicular cysts. The crown of the impacted tooth is involved along with the cystic pericoronal lesion. It projects in the cystic cavity. No imaging tests are further required as it is considered pathognomonic. The additional or primary information is provided with the help of a CT scan and MRI.

It can also help to differentiate a radicular cyst from other lesions which involve the maxilla and mandible. A small size radicular cyst is difficult to identify as it is considered a normal dental follicle. When the crown and dental sac distance expands the normal limit it is known to be the primary sign of radicular cyst.

X-ray and 3D cone beam images can be used to identify the cyst as well. A narrow margin is seen around the radicular cyst. The unilocular shape is commonly seen with these kinds of lesions.

Complete surgical removal of the radicular cyst is the first-line treatment. As this reduces the recurrence rate effectively. The tissue affecting the epithelium should be removed otherwise relapse chances are considerably high. The root canal is another effective approach to treat the infection of the tooth.

The canals should be sealed properly and removing the necrotic pulp will treat this condition. Surgical options are not suitable for the previously treated teeth. They need more vigorous treatments to improve their condition.

For larger cysts, cystostomy is recommended which allows the complete removal of the cyst and in some cases the affected tooth. The edges of the gingiva are sutured surrounding the cyst in another surgical option. This process is called marsupialization.