The symptoms associated with periventricular leukomalacia vary from child to child. Children with mild leukomalacia may or may not display signs and symptoms except for the delay in the early developmental phases. Every child with this condition will have their own set of symptoms. These symptoms become apparent over time as the infant grows and develops, rather than all at once. However, there are some most frequent symptoms associated with PVL. Those symptoms involve trouble in vision and eye movements, movements and tight muscles followed by the developmental delay that increases as time passes. The most commonly observed symptom in this condition; is spastic diplegia characterized by jerky and stiff movements. In infants, the child may exhibit exaggerated reflexes in the legs. However, when the child learns to walk, noticeable walking on tip-toes or scissor-like gait can be typical over time. It is difficult to predict the child’s ability to run or walk. 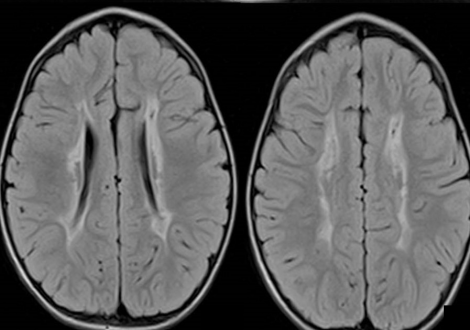 The first stage of this medical condition was initial congestion, followed later by relative normalization. The third stage then involved the development of cysts and; finally, ventricular enlargement development took place.

All of the observed infants exhibited abnormal neurological signs from 36 weeks. The infants also had; unequivocal indications of cerebral palsy by around 6 to 9 months. Two infants had a normal vision but the third infant seemed cortically blind. NMR results showed an anomaly in the ventricular system and delayed myelination too. The delay in myelination was noticeable in the corticothalamic region. It was the same region with the most extensive lesions observed on ultrasonography. Myelination in the infants was investigated, with a repeatedly performed scan.

The cerebrospinal fluid is responsible for sending; the information between the nerve cells and the spinal cord and from one part of the brain to another. PVL is a medical condition more common in premature infants than full-term infants.

Periventricular leukomalacia usually occurs because of the injury or death of the brain tissue. That injury or death then induces a lack of blood flow before, during, or after birth causing PVL. However, it is rare to figure out why or when this happens. The main thought regarding this condition is blood flow to the area surrounding the brain ventricles. However, other times, it is also related to bleeding inside the brain, known as intraventricular hemorrhage. This area is prone and fragile to injury, especially before 32 weeks of gestation. Infection at the time of delivery may also play a crucial role in causing PVL. Premature babies with IVH are also at risk for developing this condition.

There is no special treatment to cure the infants affected with periventricular leukomalacia or PVL. Premature infants are at a higher risk to be affected by this kind of leukomalacia; such babies may need special care after being discharged from the hospital. The follow-up may include occupational therapy, physical therapy, and speech therapy. PVL may cause mental or physical development problems; the severity varies. Only time can tell about the severity of infant disability. If the infant is diagnosed with PVL, his timely checking by a developmental specialist is mandatory. It aids in problem detection that allows the child to get over it early.