Intraparenchymal hemorrhage accounts for approx. 8-13% of all strokes and results from a wide spectrum of disorders. It is more likely to result in death or major disability than ischemic stroke or subarachnoid hemorrhage, and therefore constitutes an immediate medical emergency. Intracerebral hemorrhages and accompanying edema may disrupt or compress adjacent brain tissue, leading to neurological dysfunction.

Substantial displacement of brain parenchyma may cause elevation of intracranial pressure and potentially fatal herniation syndromes. Spontaneous hemorrhage into the cerebral parenchyma accounts for 8% to 13% of all strokes. It is more common in males, in blacks, and in the elderly.

Fifty percent of cases are due to the effects of chronic hypertension on intracranial perforating arteries. The basal ganglia are the most frequent site of bleeding. Lobar hematomas tend to occur in younger patients, and may be due to specific causes such as vascular malformations. Many patients will have increased intracranial pressure and will require treatment in an intensive care unit. If surgery is necessary, stereotactic aspiration and pharmaceutical clot lysis are recent developments that may be advantageous. Prognosis is related to the patient’s age and neurologic condition, and to the size, location, and rapidity of formation of the hematoma. Intracerebral hemorrhage is a severe condition requiring prompt medical attention 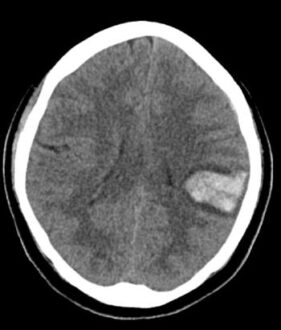 What is Intraparenchymal Hemorrhage?

Intraparenchymal or Intracerebral hemorrhage (ICH) is when blood suddenly bursts into brain tissue, causing damage to your brain. Symptoms usually appear suddenly during ICH. They include headache, weakness, confusion, and paralysis, particularly on one side of your body. The buildup of blood puts pressure on your brain and interferes with its oxygen supply. This can quickly cause brain and nerve damage.

This is a medical emergency requiring immediate treatment. ICH isn’t as common as ischemic stroke (which occurs when a blood vessel to your brain is blocked by a clot), but it’s more serious.

Treatment depends on the amount of blood and the extent of brain injury that has occurred. Because the most common cause of ICH is related to high blood pressure, getting your blood pressure lowered and under control is the first key step. Sometimes surgery is required to relieve pressure from the accumulation of blood and to repair damaged blood vessels. Long-term treatment depends on the hemorrhage location and the amount of damage. Treatment may include physical, speech, and occupational therapy. Many people have some level of permanent disability.

Intraparenchymal hemorrhage symptoms might develop right after a blow to your head, or they may take weeks or longer to appear. You might seem fine after a head injury, a period called the lucid interval.

However, with time, pressure on your brain increases, producing some or all of the following signs and symptoms:

As more blood fills your brain or the narrow space between your brain and skull, other signs and symptoms may become apparent, such as:

An intracranial hematoma can be life-threatening, requiring emergency treatment. Seek immediate medical attention after a blow to the head if you:

Intraparenchymal hemorrhage treatment goals include lifesaving interventions, supportive measures, and control of symptoms. Treatment depends on the location, extent, and cause of the bleeding. Often, treatment can reverse the damage that has been done.