Hirschsprung’s disease is a condition that affects the large intestine (colon) and causes problems with passing stool. It is a developmental disorder characterized by absence of ganglia in the distal colon, resulting in a functional obstruction. 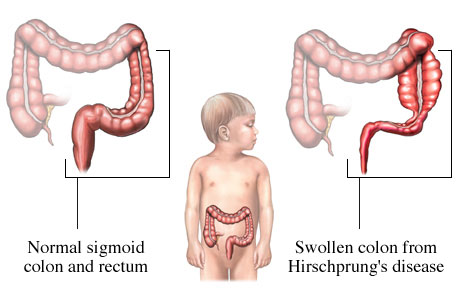 Symptoms that may be present in newborns and infants include:

Hirschsprung’s disease is diagnosed based on symptoms and test results.

To diagnose Hirschsprung’s disease, doctors often do a test called a barium enema. Barium is a dye that is put into the colon using an enema. The barium shows up better on X-rays and can help doctors get a clearer picture of the colon.

During manometry, the doctor inflates a small balloon inside the rectum. Normally, the rectal muscles will relax. If the muscles do not relax, Hirschsprung’s disease may be the problem. This test is most often done in older children and adults.

Specific treatment for Hirschsprung’s disease will be determined by your child’s doctor based on the following:

Surgery is thought to be the most effective treatment for Hirschsprung’s disease. This could be done by:

If your child’s condition is serious, a colostomy will be used to give the lower part of the colon time to heal after the abnormal section is removed. This involves making a tiny hole called a stoma in the abdomen and attaching the upper part of the colon to it. Your child’s stool will leave through the stoma and enter a collection bag, which has to be changed several times each day.

Depending on the length of the removed intestine, the stoma may be permanent. However, if the intestine heals properly, as is usually the case in children, the stoma can be surgically closed and the colon surgically joined to the rectum.