Factors that alter FRC include body habitus, sex, posture, lung disease, and diaphragmatic tone. Induction of anesthesia produces an additional 15-20% reduction in FRC beyond what occurs in the supine position alone.

The major effect of PEEP on the lungs is to increase FRC. In patients with decreased lung volume, both PEEP and CPAP increase FRC and tidal ventilation above closing capacity, improves lung compliance, and correct ventilation/perfusion abnormalities. The resulting decrease in intrapulmonary shunting improves arterial oxygenation. 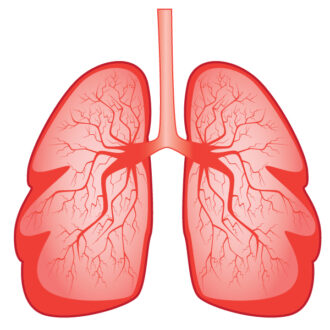 What is Functional Residual Capacity?

Functional residual capacity (FRC) refers to the volume of air left in the lungs after a normal, passive exhalation. It is used to evaluate the elasticity of the lungs and chest wall in persons with respiratory illnesses like chronic obstructive pulmonary disease (COPD).

When you exhale, you don’t expel all of the air from your lungs. Some will remain after exhalation in order to maintain elasticity of the organ. The retained air (known as functional residual volume) allows the lungs to fill with less effort while keeping the elastic forces of inhalation and exhalation in balance. Without this balance, the interchange between oxygen and carbon dioxide in our alveoli would vary, sometimes significantly. There are two reasons for the existence of FRC:

After tidal respiration the gas remaining inside lungs prevents collapse of alveoli. If after each expiration the alveoli collapse then the force required to reinflate them would be much larger with liquid-liquid interface than that to inflate partially filled alveoli with liquid-gas interface.
The gas in the alveoli acts as a buffer. The inspired gas mixes with alveolar gas and allows a constant concentration of gases in the alveoli. If this gas is not present, then there would be large fluctuations in alveolar gas concentrations and similar variations in blood gases.

FRC or the lung volume at the end of quiet expiration during tidal breathing (i.e., EELV) is increased in COPD compared with health. The term EELV is used interchangeably with FRC in the current review. It should be noted that FRC is not always synonymous with the static equilibrium volume of the relaxed respiratory system; Vr is the volume at which the elastic recoil pressures of lung and relaxed chest wall are equal and opposite in sign. Active or passive mechanisms often operate to make FRC different from Vr both in health and in COPD. For example, in healthy younger subjects during exercise, activation of expiratory muscles commonly drives FRC below the Vr. An increase in FRC measured at rest has both static and dynamic determinants in COPD. Traditionally, an increase in “static” FRC refers to an increase in Vr due to loss of lung recoil which resets the balance of forces between the lung and chest wall.

Accordingly, the static Vr is higher than that of predicted normal and FRC is increased in COPD compared with health. In this circumstance the higher Vr means that the alveolar pressure at end-expiration remains atmospheric. Interestingly, resting FRC is also dynamically determined in the setting of EFL and varies with the breathing pattern. For instance, a tachypneic breathing pattern and/or a high inspiratory-to-expiratory time ratio will shorten the time available for adequate lung emptying. Thus, mouth pressure at EELV is positive a phenomenon termed intrinsic positive end-expiratory pressure (PEEP). EELV during spontaneous breathing in flow-limited patients is a continuous dynamic variable. DH can therefore occur when, V˙E or breathing frequency are abruptly increased (e.g., voluntarily, during anxiety/panic attacks, acute hypoxemia, physical activity or during metronome pacing) or EFL is suddenly worsened (e.g., increased bronchospasm or during exacerbation. Lung hyperinflation at rest is also influenced by body position and by body mass: for example, EELV decreases when adopting a supine position or with obesity. In this respect, FRC has been shown to decrease exponentially with increasing body mass index (BMI), with the largest changes occurring with BMI in the overweight to mild obesity range.