Learn all about asynclitism definition, types, causes and management. Normal baby positions will lead to a comfortable natural labor. However, it seems that many factors can change the positions of the babies. Therefore, some labors are a little uncomfortable and harder for moms. For instance, there are always possibilities for moms to go through the asynclitism or asynclitic birth.

Asynclitism is when the baby’s head is moving through the pelvis ‘tipped’ to one side. This is usually diagnosed by a vaginal examination in labour. However, asynclitism is rarely caused by the baby having his/her head tilted to one side and rarely a real problem. Instead, like the anterior lip, it is a normal part of the physiological process of birth.

Normally, the asynclitic position will not cause a significant difficulty. It will only make the labor duration longer. Besides, it is necessary that moms search for the information related to the asynclitism previously. That will help them to understand their condition.

Digital diagnosis of asynclitism is enhanced by intrapartum ultrasound with transabdominal or transperineal approach. The accurate diagnosis of asynclitism, in an objective way, may provide a better assessment of the fetal head position that will help in the correct application of vacuum and forceps, allowing the prevention of unnecessary cesarean deliveries.

Early in labor, the baby’s head enters the brim of the pelvis in asynclitism, tipped, to get around the protruding base of the spine (sacral promontory). Early in labor, before 3 cm, asynclitism is normal and desired. At 3 cm, when the nurse checks the cervix, she’ll notice that the baby’s head is closer to the mother’s front (usually). There is space between the baby’s head and the mother’s sacrum in back. We are reassured, as long as the forehead doesn’t overlap the pubic bone (in which case, we help the baby engage in labor). By 4-5 cm, the head has usually filled in the space in the pelvis evenly. There will be more room in the back, but the side to side angles of the head match. The head has become symmetrical inside the pelvic canal. The head is synclitic. Asynclitism becomes a problem when the head is still tipped at, and after, 5 cm dilation. The asynclitic baby position is not a dangerous condition to be frightened of. Asynclitic will be one topic that occurs in many labors. 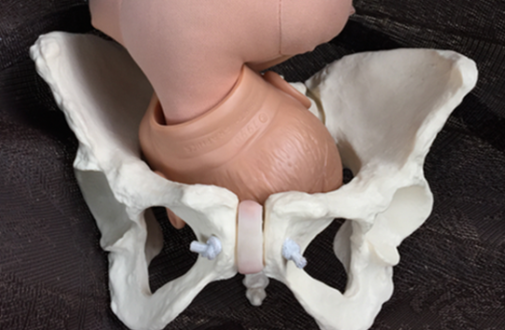 Asynclitism is the presentation of the fetal head during childbirth with the axis oriented obliquely to the axial planes of the pelvis Back pain or prolonged active labor is sometimes caused by a subtle malposition called asynclitism, in which the baby’s head is tilted and the top of it isn’t centered on the cervix.

Asynclitism is defined as the “oblique malpresentation of the fetal head in labor”. Asynclitism is a clinical diagnosis that may be difficult to make; it may be found during vaginal examination. It is significant because it may cause failure of progress operative or cesarean delivery.

There are no clear explanations for the causes of the asynclitic baby. However, some cases show that the pelvis shape causes that position. Babies love to adapt the shape of the womb. When it is time for the babies to born, they search the most comfortable position in the pelvis. Human pelvis is not always symmetrical. That makes the baby asynclitic position occurs.