Learn What is Anterolisthesis with its treatment, Causes, and Symptoms. It is a spinal cord disorder in which the upper vertebral body, slips forward onto the vertebra below. It is also called Spondylolisthesis.

Anterolisthesis, the term itself is combination of two words from different languages. First half “ante” is originally a Latin word that means “front” and “listhesis”, a Greek word that means “sliding down on a path that is slippery”. By combining two, you get a term Anterolisthesis, that means a front slide down a path that is slippery. That’s why anterolisthesis is used to describe the condition of the spine in which the upper body of vertebral, the area shaped like drum at the front of each vertebrae slips forwards on to the vertebra. In order to understand deeply, it’s better to understand the term vertebra.

The Vertebra are those bones that form an opening in which the human spinal cord passes through. Like stacks, the vertebrae are positioned on top of one another. At the front part of each vertebra is a thick part of bone that is shaped like a drum and is the referred as “vertebral body”. Between every two vertebrae, there are cushions like disks known as the intervertebral discs cushions. These discs are there to absorb and protect the spinal cord and the vertebrae from shock. In anterolisthesis, there is abnormal positioning of the upper vertebral body when compared to the body of the lower vertebra as they are slipped.

Grade 4 can also indicate 100% in some cases and the symptoms are usually very severe in this grade. 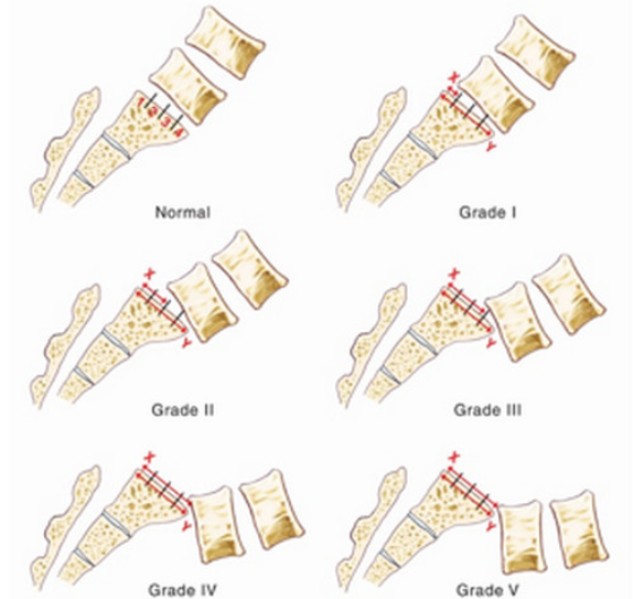 You want to know more about Anterolisthesis Grade 1-2, then continue reading. You will find all relevant information about its causes, symptoms as well as available treatments.

Anterolisthesis is a medical condition, in which there is a great impact on the spinal cord or the vertebra mainly the c4 and c5. It could be due to:

In order to avoid this condition, people are advised to engage in exercises for anterolistheis and to maintain good body posture when sleeping, sitting and in other daily activities, especially recommended for old people.

Anterolisthesis symptoms may vary from person to person, and also vary depending on the area that is affected by the slippage. Major symptoms include:

Although there are various Anterolistheis treatments but they vary depending on the intensity as well as severity of the condition. In most case, the X-ray image are required to determine the degree of anterolisthesis. If the X-ray becomes fail to give a detailed inside diagram then a Magnetic Resonance Imaging (MRI) or a Computer Tomography (CT) scan are done. It is unfortunate but true that the patient may not be able to regain the fitness that was there before the Anterolisthesis. The available Anterolisthesis treatments can be classified into two broad categories i.e. Conservative treatments and surgery.

But if these treatments do not work, then the patient has no option but to undertake surgery. It is an invasive procedure that has various risks. In most cases however, the surgery is successful and the patient will get relief. The surgery for treatment of Anterolisthesis is referred to as interbody fusion. In interbody fusion, the surgeon will make an incision in the patient’s back. It is done through the mid layers of those ligaments and muscles which are positioned on both sides of the spine.