The mortality and morbidity of acalculous cholecystopathy are related to the invasive diagnostic tests that frequently are performed and to the treatment of the condition (i.e., cholecystectomy). Biliary dyskinesia does not progress to more serious conditions, such as acute cholecystitis. Laparoscopic cholecystectomy provides symptomatic relief in 90-95% of cases of biliary colic associated with gallstones. In contrast, despite appropriate patient selection, only approximately 80% of patients with acalculous cholecystopathy experience resolution of their symptoms.

Most patients with acalculous cholecystitis are critically ill, which makes the diagnosis challenging to make. Cholecystitis is but one of many potential causes of systemic inflammatory response syndrome or sepsis that may develop in such patients. Moreover, the differential diagnosis of jaundice in the critically ill patient is complex, and includes intrahepatic cholestasis from sepsis or drug toxicity and “fatty liver” induced by TPN, in addition to acalculous cholecystitis. Rapid and accurate diagnosis is essential, as ischemia can progress rapidly to gangrene and perforation. 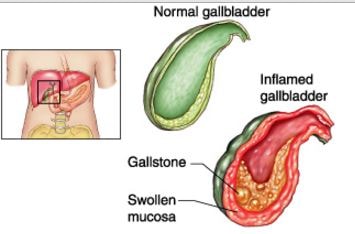 What is Acalculous cholecystitis

Acalculous cholecystitis treatment depends on the severity of the condition and the presence or absence of complications.

The main cause of acalculous cholecystitis is gallbladder stasis with resulting stagnant bile. The pathophysiology of acalculous cholecystitis is poorly understood, but it is probably multi-factorial. Functional cystic duct obstruction is often present and related to biliary sludge or bile inspissation caused by dehydration or bile stasis (due to trauma or systemic illness). Occasionally, extrinsic compression may play a role in the development of bile stasis. Some patients with sepsis may have direct gallbladder wall inflammation and localised or generalised tissue ischaemia without obstruction.