It is a congenital anomaly in which the brain tissues grow extensively into the spinal canal which result in the elongation of the cerebral tonsils and pushed down the skull through an opening at the base of the skull. This elongation leads to the blockage of the natural pathway resulting in the resisted flow or no flow at all of the cerebrospinal fluid (CSF). Finally this extension of tissues exits through the medial and lateral apertures of the fourth ventricle.

In most of the cases these malformations are triggered as a result of any severe head trauma, forced intracranial pressure, raised pressure due to hematoma or enhanced dural strain resulting in pulling of the brain into the foramen magnum portion. Mainly, head traumas enhance the risk of these malformation by the factor of 4. Sometimes ectopia may exist in some patients but it does not show any signs and symptoms leading to the failure of diagnosis but a stroke may convertit in the symptomatic condition.

Conventionally, these malformations are characterized by the size of the cerebral tonsils protruding through the foreman magnum. 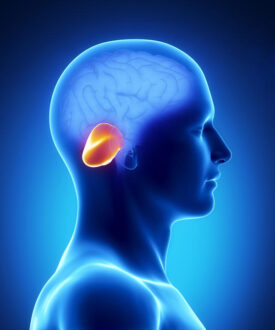 This malformation stays asymptomatic in the start of the childhood and convert to a symptomatic condition in the late childhood or adulthood. Severe headaches are counted as the conventional symptoms of this condition but some other signs are also experienced including;

As there are many other diseases involving the problems of bony and soft tissues which may mislead the proper diagnosis of the tonsillar ectopia. Not only the physiological similarities, there are many other symptomatic similarities such as; headache, neck pain, dizziness, limb’s numbness and tingling, weakness and sleep disorders, which may lead to the misunderstanding of the rational diagnosis.

But there is a hallmark symptom for this malformation which may help in differentiating the disease from other disorders. This hallmark symptom includes severe headache in the back of the head worsens with coughing, sneezing or straining.

The major cause behind this malformation is considered to be the presence of the too small or deformed section of the skull which may insert pressure on the brain tissues and crowd the area resulting into the displacement of the lower part of the cerebellum into the upper portion of spinal canal. This displacement is often characterized as an extension of the brain tonsils and named Chiari type 1 malformation. Meanwhile, the type 2 Chiari malformation involves a form of spina bifida known as myelomeningocele and differentiate form type 1 on this base.

This above stated displacement results in the blockage of a natural pathway leading to the impaired circulation of the cerebrospinal fluid (CSF). This may cause the blockage of transmission of the neurotransmitter signals from brain to the body and on the other hand may cause the accumulation of spinal fluid in the central nervous system resulting in enhanced pressure. This pressure causes the appearance of neurological signs and symptoms leading to proper diagnosis of the malformation.

Chiari malformation type 1 is conventionally characterized by the size which is greater than the 3-5mm below the foramen magnum. This malformation can be measured though MRI but the results from these radiographic investigation may vary largely leading to the misleading in the clinical course and patient outcomes.

There are many treatment and management options for this condition which vary depending upon the severity of the symptoms, enlargement of the tonsil herniation or the presence of syringomyelia.

In the case of severe symptoms which may accompanied by syrinx, surgery is the only treatment option left. This option is majorly aimed to stop the further progression of the symptoms caused by the extension of cerebral tonsils, and get rid of the compression of the brainstem.Specifically the posterior fossa decompression surgery helps to widen the foramen magnum by the removal of bone at the back of the skull and spine.

This condition can be managed well at the initial level by taking some measures under high consideration including;