Tarsal tunnel syndrome is a rare situation caused by abnormal stress on the posterior tibial nerve or its connected branches as it passes through the tarsal canal just beneath the ankle bone. This canal is formed by the flexor retinaculum on the outside and bone on the inside. The posterior tibial nerve is situated at the back of medial malleolus, the bump on the interior of the ankle. It runs under the flexor retinaculum, which is a band of fibrous tissue giving form to the tunnel.

The tarsal tunnel contains the tibial nerve, the posterior tibial artery, tendon and veins that travel along its pathway. The tibial nerve divides into three different pathways, one to the heel, and the other two to the bottom of the foot. 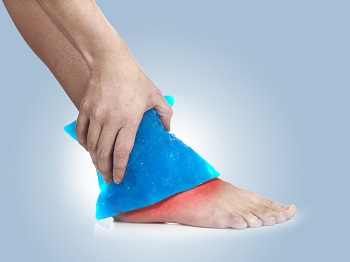 Here you can find symptoms of Tarsal Tunnel Syndrome and some home remedies for its treatment.

Compression of the structure in the region of the ankle can lead to irritation of the posterior tibial nerve, causing a combination of symptoms, which make up the tarsal tunnel syndrome.

A variety of treatment options are available to treat tarsal tunnel syndrome. Ignoring symptoms may leads to the condition become complex. Once complex, healing slows considerably resulting in noticeably increased recovery times and greater likelihood of future recurrence. So it is important to take possible treatment timely.
Below are some home treatments, you can consider while having tarsal tunnel syndrome:

Apply Ice Pack
Cold compress greatly helps in reducing pain and inflammation. Apply an ice pack to the affected area and place a thin towel between the ice and the skin. Use ice for 20 minutes and then wait at least 40 minutes before icing again.

Use Elastic Bandage
Restriction of movement decreases the possibility of further injury. Immobilize your ankle and foot by wrapping tightly with an elastic bandage. For intense or persistent ankle pain, apply an ankle brace.

Take an Anti-inflammatory
The anti-inflammatory medications and rest helps in treating initial symptoms of tarsal tunnel syndrome. Non-steroidal anti-inflammatory drugs (NSAIDs), such as ibuprofen facilitate in reducing swelling and inflammation of tissues around the nerve in the ankle, consequently reduce nerve irritation.

Use Custom Inserts
Flattened foot arches may get better by using specialized or modified orthotics placed inside the shoes. Custom shoe inserts may be prescribed to help maintaining the arch and limit excessive motion that can cause compression of the nerve.

These devices facilitate in relieving foot pronation, a general situation where the inner edge of the foot rolls in and flatten the arch of the foot. Pronation stretches and irritates the tibial nerve in the tarsal tunnel. Orthotics inside the shoe supports the arch and decreases tension on the tibial nerve.

Physical therapy
Exercises and other physical therapy modalities may be useful to reduce symptoms. Ask a doctor about cortisone injections in the foot, which may temporarily relieve your symptoms by decreasing inflammation and swelling in the tarsal tunnel and reducing nerve irritation.

In circumstances when medication doesn’t work surgery is the best option for treating tarsal tunnel syndrome. The foot and ankle surgeon will recommend that if surgery is necessary and will select the suitable method or measures based on the cause of the condition.As soon as the healing begins, a steady return to activity or sport should be done under supervision of the treating practitioner and provided there is no increase in symptoms.