Subtalar Arthroereisis is a surgical technique that is aimed to correct a dynamic flatfoot abnormality, often known as pes planovalgus. By putting an implant into the subtalar joint, it is possible to control the eversion of the hindfoot. Pes Plano valgus is the clinical term for an abnormal foot that has a flattened arch, an ankle that looks like it is rolling in, and a heel that looks like it is rolling out from beneath the ankle. Treatment becomes necessary for pes Plano valgus feet.

In both toddlers and adults, flexible flatfoot is a prevalent malformation. It is distinguished by a collapsed medial arch, eversion of the calcaneus, medial rotation of the talus, plantar flexion of the talus, and flexion of the forefoot. In most cases, babies are born with flexible flat feet, and the arch of the foot does not fully form until sometime in the first ten years of life after birth. The majority of cases with flexible flatfoot either resolve on their own or continue to be asymptomatic. However, disorders that are symptomatic or pathological require treatment.

In short, the main goal of treatment for flexible children with flatfeet is to fix any deformities and get the feet back into the right position. Subtalar joint arthroereisis is an easy, minimally invasive, and fast-healing procedure for this purpose. Deformities are efficiently corrected, alignment is restored, and soft tissue functions are reconstructed without fusion of joints. 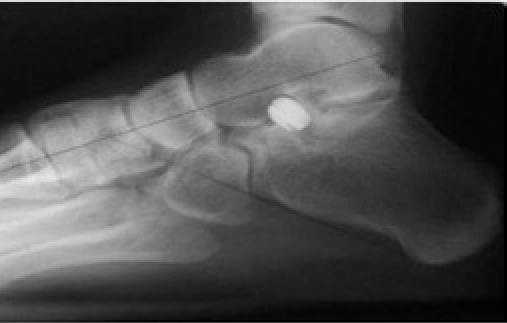 Subtalar arthroereisis is considered an effective surgical method for treating flexible flatfoot in adults by reducing discomfort, stiffness, and fragility. The idea of decreasing overpronation has gained widespread acceptance despite differing views on the ideal approach and implant. In the past, bone grafts were employed as subtalar joint implants; nowadays, numerous specially made implants are utilized. There are two approaches to subtalar arthroereisis, which are as follows:

The following steps are followed during this surgery:

Patients who underwent medial soft tissue tightness and lengthening of the Achilles tendon must wear plaster fixation for four weeks. Plaster fixing is not necessary for those who have not undergone surgery on soft tissues or gastrocnemius release. On the first day following surgery, patients undertake passive plantar and dorsal flexion exercises while wearing walking braces at night. On the second day following surgery, the ankle is put through active flexion exercises.

The suture is usually removed 12-14 days following the procedure. Three weeks after surgery, non-weight-bearing workouts like swimming and biking are typically advised. Six weeks following surgery, partial weight-bearing functional exercises are recommended.  After 12 weeks, an X-ray must be done every three months to monitor the deformity’s repair and the implant’s position.

The complications that are mostly found in this surgery are categorized as:

The most frequent of these complications is unquestionably sinus tarsal discomfort. The benefits and risks of subtalar arthroereisis remain unclear despite recent advances in the understanding of the procedure’s mechanics and function.