SMA syndrome was first described in 1861 by Carl Freiherr von Rokitansky in victims at autopsy, but remained pathologically undefined until 1927 when Wilkie published the first comprehensive series of 75 patients. According to a 1956 study, only 0.3% of patients referred for an upper-gastrointestinal-tract barium studies fit this diagnosis, making it one of the rarest gastrointestinal disorders known to medical science.

Medical therapy usually begins with the initiation of intravenous fluids and, once no significant emesis, with the frequent administration of small amounts of liquids. In some cases, nasojejunal or nasogastric tube feedings with a standard liquid diet may be indicated. If the patient is completely obstructed or unable to tolerate liquids, total parenteral nutrition is indicated. 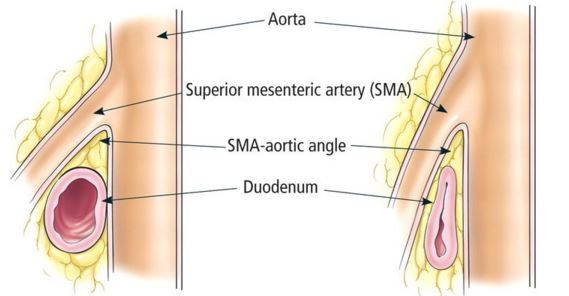 Superior mesenteric artery syndrome (SMAS) is a digestive condition that occurs when the duodenum (the first part of the small intestine) is compressed between two arteries (the aorta and the superior mesenteric artery). This compression causes partial or complete blockage of the duodenum. This rare, potentially life-threatening syndrome is typically caused by an angle of 6°–25° between the abdominal aorta and the SMA, in comparison to the normal range of 38°–56°, due to a lack of retroperitoneal and visceral fat (mesenteric fat). In addition, the aortomesenteric distance is 2–8 millimeters, as opposed to the typical 10–20. However, a narrow SMA angle alone is not enough to make a diagnosis, because patients with a low BMI, most notably children, have been known to have a narrow SMA angle with no symptoms of SMA syndrome

The superior mesenteric artery (SMA) is one of the three non-paired arteries that provide blood to the midgut and other abdominal viscera. The superior mesenteric artery (SMA) arises from the anterior surface of the abdominal aorta, just inferior to the origin of the celiac trunk, and supplies the intestine from the lower part of the duodenum through two-thirds of the transverse colon, as well as the pancreas.

Symptoms vary based on severity, but can be severely debilitating. Symptoms may include abdominal pain, fullness, nausea, vomiting, and/or weight loss. Some symptoms are;

For many, symptoms are partially relieved when in the left lateral decubitus or knee-to-chest position, or in the prone (face down) position. A Hayes maneuver (pressure applied below the umbilicus in cephalad and dorsal direction) elevates the root of the SMA, also slightly easing the constriction. Symptoms can be aggravated when leaning to the right or taking a supine (face up) position. Other complications that may arise in people with SMAS include: