Scrotal calcinosis is a rare and benign clinical disorder of the skin which involves the accumulation and deposition of calcium and phosphorus crystals in the cutaneous tissues of the skin of the scrotal area in men.

Meanwhile, the blood level of these two components; calcium and phosphorus remain normal in the patients of scrotal calcinosis. It is most prevalent in men of younger age during their age of adolescence. Mostly this disease shows no clinical manifestation but in some patients it can be very painful involving the occurrence of hard yellow bumps on the skin of scrotum which may range in size from 1mm to few centimeters. These nodules or bumps are calcium or phosphorus deposits mainly located in the dermis of the scrotum and surrounded by a type of foreign granulomatous material.

However; there are some controversies about the pathology of this disease. As some researchers may claim that initially some cutaneous cysts may appear on the specified area of the skin which further undergoes the dystrophic calcification under vulnerable conditions and results in the formation of scrotal calcinosis. But others may deny the presence of any kind of pre-existing cysts on the scrotal skin. 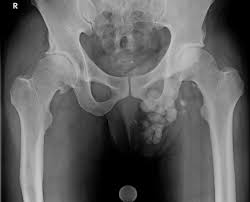 Scrotal calcinosis symptoms depend upon the underlying cause but since it is considered to be idiopathic, it limits the number of clinical manifestations in the patients. Most common clinical signs and symptoms may include;

Scrotal calcinosis is considered to fall under the category of idiopathic calcinosis which explains the fact of no known underlying causes. Despite many controversies it has now been accepted that the pre-existing cysts in the specified affected area may undergo dystrophic calcification resulting in the formation of these hard lesions or bumps called scrotal calcinosis. But generally it is stated that this disorder can be caused by an infection or injury to some serious systemic disease such as kidney failure.

Some other most commonly stated underlying causes of idiopathic scrotal calcinosis involves;

Treatment for this disease majorly depends upon the underlying reason for this disease. As in this case scrotal calcinosis is considered idiopathic so the professional may recommend the treatment according to the patient’s condition and severity of the disease. The most commonly suggested treatment option is the surgical procedure because it allows the removal of even the smallest nodules from the scrotal skin and somehow helps to restrain the recurrence of this disease.

The cases where the nodules become painful and get badly infected then the removal of these nodules from the scrotal skin is done by the surgical method. But it is recommended to start from a small portion of lesion and restrict the recurrence as the chances are very likely in this disease.

However, some other treatment options are also suggested in some non-serious cases, including;