Learn all about sacralization of lumbar 5 vertebra associated symptoms and treatments used to get rid of it. Sacralized lumbar vertebra can affect spinal movement and put excess stress on the lumbar vertebrae and in-between disc. Times have changed, and scientists have studied this phenomenon more thoroughly. It turned out that there is nothing “Holy” or “otherworldly” in the sacralization.

The fifth lumbar vertebra, also known as the L5 vertebra, can be a source of tremendous pain and discomfort. Sacralization of L5 possibly represents a structural and biomechanical adjustment to compensate for reduced joint interfaces associated with smaller sacra. Most individuals have five lumbar vertebrae, while some have four or six. Lumbar disorders that normally affect L5 will affect L4 or L6 in these latter individuals.

The fifth lumbar vertebra is characterized by its body being much deeper in front than behind, which accords with the prominence of the sacrovertebral articulation; by the smaller size of its spinous process; by the wide interval between the inferior articular processes, and by the thickness of its transverse processes, which spring from the body as well as from the pedicles. The fifth lumbar vertebra is by far the most common site of spondylolysis and spondylolisthesis.

Sacralization of the fifth lumbar segment also has another far-reaching effect, one not associated with joint mobility. This relates to the altered centre of gravity of the base of the spine. With the L5 fused to the sacrum, the seat of spinal movement is raised. L4, the new base of spinal movement, lacks the secure shoring afforded L5 and this can lead to problems. The most mobile segment in the spine in terms of forward bending is the second vertebra up from the bottom, L4. Its inherent mobility means the usual problem with a sacralized L5 is that L4 is too flimsy to cope and the L4-5 joint becomes over-used. Usually, by the middle to late decades, it starts to suffer excessive strain and eventually becomes painful.

The extensive ilio-lumbar ligament firmly secures the base of the spine to the sacrum and inner pelvic bowl. Treatment for lumbar sacralization must always involve strengthening exercises of the muscles both front and back of the spine. The spinal intrinsic muscles (multifidus) must be re-educated to bolster the bending strength of L4 as the raised seat of spinal movement. In Fairness it should be noted that the sacralization of l5 vertebra is rare in 2% of cases among all causes of lower back pain. 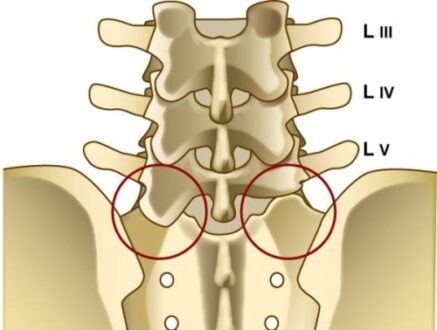 Sacralization is a fusion of the first sacral (S1) and the 5th lumbar vertebra L5. Sacralization is a congenital condition. Spines with sacralized fifth lumbar vertebrae are quite commonly encountered. Sacralization represents a transitional state at lumbosacral junctions and is more susceptible to degenerative changes resulting from the altered load-bearing patterns at these regions. Due to sacralization, the L5 vertebra appears and works more like the sacral components and hence it is termed as sacralized vertebra.

Sacralization of lumbar vertebra may be asymptomatic but is not always clinically insignificant. The sacralized lumbar vertebra, which is normally a non-fused vertebra, may sometimes face challenges in its function after getting fused with the sacrum. As the pattern of sacralization varies from person to person, the associated problems, if any, may also vary in severity and intensity. Sacralization is characterized by the appearance of the pain syndrome after the age of 25, when a man approaches professional activity. Other symptoms of pathology are:
• Pain in the gluteal region and lower extremities
• Loss of skin sensation in the thigh and in your lower back
• Local pain on palpation along the spinal column
• Limiting a circular motion of the lumbar spine
• Decreased mobility of the spine

Sacralization of L5 treatment includes medical, surgical and therapeutic treatments. Medications include:
• NSAIDs; Nonsteroidal anti-inflammatory drugs (NSAIDs) help relieve pain and reduce inflammation common to osteoarthritis. Some NSAIDs, such as ibuprofen (Advil, Motrin IB, others) and naproxen (Aleve), are available without prescription.
• Muscle relaxants; Medications such as cyclobenzaprine (Amrix, Fexmid) can calm the muscle spasms.
• Antidepressants; Nightly doses of tricyclic antidepressants, such as amitriptyline, can help ease chronic pain.
• Some anti-seizure drugs, such as gabapentin (Neurontin, Gralise, and Horizant) and pregabalin (Lyrica), are used to reduce pain caused by damaged nerves.
• Opioids; Drugs that contain codeine-related drugs such as oxycodone (Percocet, OxyContin, others) and hydrocodone (Norco, Zohydro, others) can be habit-forming