The coronavirus pandemic has created dread around the globe. It has affected around 22 million individuals all over the world. The search for the vaccine is being carried out by researchers and scientists around the world. Among all this, Moderna, a biotechnology company in Cambridge, Massachusetts, has developed a vaccine to fight the COVID-19 pandemic beast. Moderna is working in collaboration with the National Institute of Allergy and Infectious Disease (NIAID), part of the National Institutes of Health (NIH), and is funded by theCenter for Epidemic Preparedness and Innovations (CEPI). The vaccine is given the name mRNA-1273 since it is nucleic acid based messenger ribonucleic acid (mRNA) vaccine. The mRNA-1273 encodes for the spike glycoproteins of SARS-CoV. The vaccine is enclosed in a lipid nanoparticle and is injected intramuscularly. The first clinical batch of mRNA-1273 was completed on 7th February 2020.

The pre-clinical study of the mRNA-1273, a vaccine developed by the Moderna Incorporation, was conducted on the mice. This study was in collaboration with the National Institute of Allergy and Infectious Disease (NIAID). The study animal models, after immunization, were challenged with the SARS-CoV. The mRNA-1273 had inhibited the SARS-CoV replication in the lungs of mice. The study was also conducted in non-human primates. The result of this study is published in the New England Journal of Medicines. For the non-human primate study, 12 of each female and male Indian rhesus macaques between the age of 3-6 years were used.

They were given two doses of either the 10µg or the 100µg of mRNA-1273 intramuscularly with the 4-week gap whereas the control was given an equal amount of phosphate buffer saline (PBS). On the 8th week, the rhesus macaques were challenged with the SARS-CoVintranasally. Antibodies and T-cell responses were evaluated before the challenge. The vaccine was able to produce robust viral neutralizing action, protect both the lower and upper airways of the study models and no evidence of pathological changes or viral replication in the lungs were found. 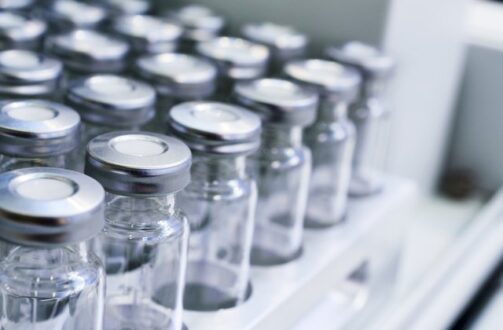 The Phase I clinical trial of the mRNA-1273 was conducted at Kaiser Permanente Washington Health Research Institute (KPWHRI), Seattle. The trial was led by a senior investigator Lisa A. Jackson, at KPWHRI. The funding for the trial was provided by the National Institute of Allergy and Infectious Disease (NIAID) which is an institute of National Institutes of Health (NIH). The Phase I trial was an open-label and dose-ranging trial. The purpose of the trial was to assess different doses of mRNA-1273 and their ability to produce the immunological response and the safety of mRNA-1273 in healthy volunteers. A total of 45 healthy volunteers male and non-pregnant females between the age of 18-55 years were included in the study.

The individual who had an active infection, experiencing any sign or symptom of the coronavirus disease, or had any recent exposure were excluded from the study. The volunteers were divided into three groups of 15 volunteers to receive two doses of 25µg, 100µg, and one dose of 250µg. The results have shown that the SARS-CoV neutralizing activity of the mRNA-1273 is dose-dependent which increases with an increase in the dose. Seroconversion was found with a single dose on the 15thday.

After the two weeks of the second dose, the binding antibodies were found to be equal and greater in number than the one found in the convalescent COVID-19 patient. The vaccine was found to be safe, well-tolerated, and had a good immunological file. The adverse effect such as erythema at the injections site, chills, myalgia, and some systemic effects have been reported after the second injection and by higher dose group but none of these required any treatment. No serious adverse event was reported. Chief Medical Officer of the Moderna had given the following remarks about the Phase I result:

“These interim Phase 1 data, while early, demonstrate that vaccination with mRNA-1273 elicits an immune response of the magnitude caused by natural infection starting with a dose as low as 25 µg. When combined with the success in preventing viral replication in the lungs of a pre-clinical challenge model at a dose that elicited similar levels of neutralizing antibodies, these data substantiate our belief that mRNA-1273 has the potential to prevent COVID-19 disease and advance our ability to select a dose for pivotal trials.”

The Phase II clinical trial of mRNA-1273 was conducted to assess the safety, efficacy, tolerability, and immunogenicity of the vaccine. The phase II trial was a placebo-controlled and dose adjustment trial. The trial included 600 volunteers among two age groups one between 18-55 years while the other above the age of 55 years. The groups received a placebo, two doses of 50µg, and 100µg mRNA-1273 with a 4-week gap.the trial is currently ongoing.

Phase III of the clinical trial of mRNA-1273 will shortly begin. The trial will be randomized and placebo-controlled. Around 30,000 volunteers will be included across the USA. The volunteers will either receive 100 µg of mRNA-1273 or a placebo. The result of the Phase III trial is expected in October 2020. Anthony S. Fauci, Director of NIAID, shared his thoughts about mRNA-1273 as

“Although face coverings, physical distancing and proper isolation and quarantine of infected individuals and contacts can help us mitigate SARS-CoV-2 spread, we urgently need a safe and effective preventive vaccine to ultimately control this pandemic. Results from early-stage clinical testing indicate the investigational mRNA-1273 vaccine is safe and immunogenic, supporting the initiation of a Phase 3 clinical trial. This scientifically rigorous, randomized, placebo-controlled trial is designed to determine if the vaccine can prevent COVID-19 and for how long such protection may last.”

Whenever an antigen enters the body, the body recognizes it as a foreign particle and starts an immune response that can either be a cellular or humoral response or both. Vaccines are used prophylactically to fight the infection. Convectional vaccines are designed to provoke an immune response which produces antibodies. So when later in life if the vaccinated individual contracts an infection, his body already has antibodies for that particular infection, which fights off the antigen. These conventional vaccines are basically the non-virulent, replication-deficient, live or dead pathogens or their proteins that are injected into the body so that they can produce antibodies against that particular pathogens. For the development of these conventional vaccines, pathogens are modified to make them non-virulent and replication-deficient which takes a lot of time and effort. Another vaccine type is the nucleic acid vaccines.

These vaccines can either be DNA vaccines or the RNA vaccine. These vaccines work by introducing the genetic material into the cell. The genetic material expresses the antigen or its proteins. Once it enters the cell, the cell starts making the antigen by utilizing the foreign genetic material. These nucleic acid vaccines are usually encapsulated in a lipo nanoparticle that expresses the spike proteins, for delivery into the body. The nucleic acid vaccines have good stability, provide long-term immunity, and can be easily manufactured on a large scale. The Moderna coronavirus vaccine (mRNA-1273) is a nucleic acid based vaccine that utilizes mRNA. One of the limiting factors of RNA vaccine is their weak stability and potency since they are broken down sooner than the DNA.

The mRNA-1273 contains the bits of the SARS-CoV mRNA, which have the instructions for the production of the proteins. These bits are encapsulated into the lipids so that they can enter the cell with ease. On entry into the cell, they go to the ribosome machinery where they began to make copies of the spike glycoprotein of the SARS-CoV by utilizing the instructions of the mRNA. These harmless spike glycoproteins are present on the surface of SARS-CoV and act as an antigen. They are an excellent target for vaccines. The body recognizes these spike glycoproteins as foreign particles and initiates series of immunological responses. These immunological responses result in the formation of the antigen-specific antibodies and T-cells which then fights off the infection.

The technology used by the Moderna for the preparation of the mRNA-1273 has potential efficacy, speed, and reliability for the production of the vaccine. The company is expecting to make the vaccine available by 2021. The company is planning to produce an estimated 500 million to 1 billion doses per year by utilizing its own manufacturing unit along with that of Lonza Ltd. For the large scale manufacturing, the company has partnered up with Catalent Biologics. Chief Executive Officer of Moderna, StephaneBancel has said:

“With today’s positive interim Phase 1 data and the positive data in the mouse challenge model, the Moderna team continues to focus on moving as fast as safely possible to start our pivotal Phase 3 study in July and, if successful, file a BLA. We are investing to scale up manufacturing so we can maximize the number of doses we can produce to help protect as many people as we can from SARS-CoV-2.”