These hyperpigmentations progress steadily and there are no specific findings or genetic factors related to this syndrome. The oral cavity or the mucosa which is the inner lining of the lips sometimes describes the health of a person. If this area is pigmented or any discoloration occurs it means you have some health issues. But no specific reason is described in the literature or from the reported cases of this syndrome. So we can say that the origin of this disorder is still unidentified and there is no patrimonial abnormality associated with it. 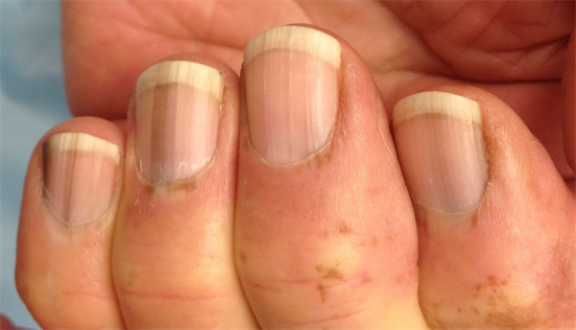 Laugier Hunziker syndrome (LHS) is associated with hyperpigmentation or discoloration on specific parts of the skin. It usually appears on the oral mucosa which covers the major portion of the mouth except that of teeth. This pigmentation not only occurs beneath the lips but also on the nails with longitudinal biconvex dark brown patterns. The major symptoms of this disorder are specifically these pigmentations which can easily be seen on the skin especially on the oral mucosa and on the nails. Not all patients have both oral and nail participation, the occurrence of longitudinal pigmented nail bands in cases of LHS is 44% to 60%. The reported cases worldwide show that the expected diagnosed age of this syndrome is

approximately 40 to 46 years. The most affected areas are the lips and the oral mucosa. Increased pigmentation or discoloration occurs on the tongue and the surrounding areas. In extreme cases are also seen in palmoplantar areas.

LHS appears to be an unknown syndrome with not specified causes. But it has some major symptoms that appear on the skin showing an alarming situation for an individual’s health.

Like a normal fever, such discolorations and hyperpigmentations on the skin are an alarm or a warning to one’s health which should be noted immediately.

Some Major Reasons To Pigmentations

These pigmentations mainly occur near the gums of the smoker. But such pigmentations could be vanished or cured once the smoker quit smoking. The cause of discoloration and pigments related to this syndrome is still anonymous. The proper medication for this syndrome could only be done after a proper examination of patients’ medical history. It is not obvious to have this disorder while you are ill or having some health issues, but it can be seen in people who look healthy regardless of any bad eating habits. The real and absolute causes of the laugier-Hunziker syndrome are not being cleared yet but more than 100 cases of LHS are described mainly affecting whites and in female genders.

Most of the cases of LHS reported seeming to be unexpected because no such medical history of patients is to be noted. Neither any family history of abnormal pigmentation and discoloration

of the skin (pigmentation in oral mucosa) or even longitudinal dark brown pigmentations on nails appeared nor much drug intake or excessive smoking habits found. Still, patients were having laugier Hunziker syndrome.

Disorders related to pigmentations or discoloration of skin whether it’s due to drug intake, excessive smoking, or even in disorders like AIDS, could be treated with righteous medication, and healthy lifestyle, and good eating habits. As far as LHS is concerned, no proper treatment is developed yet. Results have shown that this LHS is not much hazardous so no proper treatment is necessary for this syndrome as all the cases reported worldwide seem to be harmless.