Learn all about Latissimus Dorsi muscle, muscle pain symptoms its functions and exercises used to get rid of pain in muscle. The Latissimus Dorsi muscle is one of the largest muscles in the back. Because of its size and central location, injury to this muscle can be debilitating. Injuries may include rips and tears.

A majority of the population has experienced muscle pain at some point in their life or the other. Among these, people complaining of pain in the back surpass people suffering from pain in other regions by a considerable extent. Pain in the Latissimus Dorsi is one such condition where pain is felt in the spinal area, shoulder and upper arm of the body.

Most Latissimus dorsi exercises concurrently recruit the teres major, posterior fibers of the deltoid, long head of the triceps brachii, among numerous other stabilizing muscles. Compound exercises for the ‘lats’ typically involve elbow flexion and tend to recruit the biceps brachii, brachialis, and brachioradialis for this function. Depending on the line of pull, the trapezius muscles can be recruited as well; horizontal pulling motions such as rows recruit both Latissimus dorsi and trapezius heavily.

Pain in the Latissimus Dorsi muscle is generally characterized by minor changes in the muscle activity or alteration in the position. The American Academy of Orthopaedic Surgeons have endorsed the standard healing protocol abbreviated as RICE, that is, Rest, Ice, Compression and Elevation to bring about a significant change in the condition of the patient. Allowing the affected muscles to relax and rest leads to faster healing and growth of new tissues while icing is likely to reduce the swelling and act as a natural pain relief. Compressing the affected area also helps with inflammation while elevation catalyzes the healing procedure by reducing swelling and returning the blood to the heart. 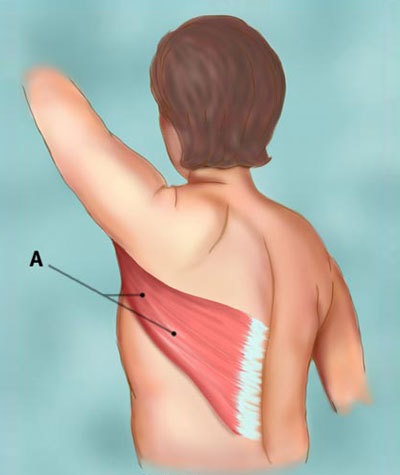 The Latissimus Dorsi muscle, whose name means “broadest muscle of the back,” is one of the widest muscles in the human body. Also known as the “lat,” it is a very thin triangular muscle. The muscle is divided into two segments, which are configured symmetrically along the backbone. The muscle is located in the middle of the back, and it is partially covered by the trapezius. It originates along the seventh thoracic vertebra (T7) region of the spine and extends to its insertion point on the humerus.

The muscle rises up to meet the shoulder area and is secured to an indentation on the humerus, commonly known as the upper arm bone. A muscular slip, the axillary arch, varying from 7 to 10 cm in length, and from 5 to 15 mm in breadth, occasionally springs from the upper edge of the Latissimus dorsi about the middle of the posterior fold of the axilla, and crosses the axilla in front of the axillary vessels and nerves, to join the under surface of the tendon of the pectoralis major, the coracobrachialis, or the fascia over the biceps brachii. This axillary arch crosses the axillary artery, just above the spot usually selected for the application of a ligature, and may mislead a surgeon.

Latissimus Dorsi is not used strenuously in common daily activities but is an important muscle in many exercises such as pull-ups, chin-ups, lat pull-downs, and swimming. Adduction, extension, horizontal adduction or traverse extension, internal rotation of the shoulder joint and flexing from a protracted position are included in the functions of this muscle. Latissimus Dorsi muscles also play a harmonious role in the protraction and oblique flexion of the lumbar spine. These muscles are also termed as “accessory breathing muscles” as they help in the expansion and compression of the rib cage and aid in breathing to a certain extent.

Pain in the Latissimus Dorsi region can be acquired at any point of time, such as, during lifting children, at the gym, while rowing, swimming, playing baseball and the like. Furthermore pain can radiate over shoulder blade and down the backside of arm till it reaches 4th and 5th finger.

Share
Previous Why have you Diarrhea in the Morning?
Next What is Intercostal Neuralgia? Symptoms, Causes, Treatment