How to Treat Wasp Sting naturally at home

Wasps belong to the order Hymenoptera. Wasps usually reside in the months that provide mild or warm temperatures. Wasps typically sting when their nest is disturbed. If stung firstly remove the stinger left in the body as soon as possible with tools immediately available like knife, card, tweezers or needle.

The venom contained in a wasp sting induces a local toxic reaction at the site of attack. While in some people, this reaction is an allergic one – but only in those people who have been sensitized by a sting. The stinging part consists of a sac of venom attached to a barbed stinger. When a wasp stings, the sac contracts and dump venom into the tissue.

The wasp sting is followed by mild to severe symptoms. Mild symptoms include irritation and pain with swelling, redness, itching, a local infection, and skin hives are also common responses to a wasp sting. However, extreme reactions indicate an allergy. It is important to monitor your symptoms as it may also leads to death in extreme reaction cases. For those who has left with a painful wasp sting the home remedies may help relieve and soothe the wound without the need of medicated treatments. There are many natural ingredients that can be applied to an insect bite, all of which can be applied liberally as needed until the pain subsides, which is usually within a few hours. 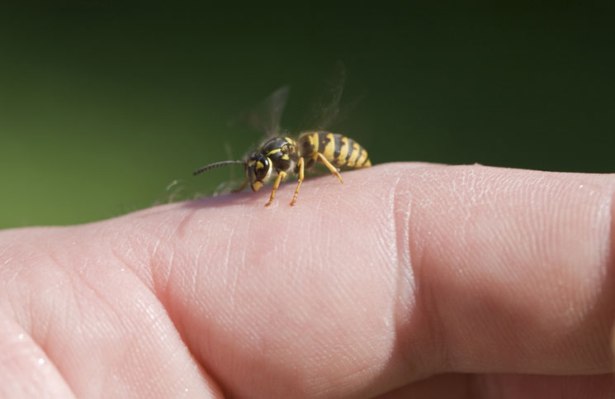 This article can gives you much information if you ever go through the wasp sting. Here are simple home remedies which can relieve the immediate pain and discomfort due to stings or bites.

When stinger is removed ice cubes helps to reduce swelling. When the ice packs are pressed against the area of sting for 10 minutes, it not only relieves the swelling but eases the pain and itchiness.

Sodium bicarbonate, generally known as baking soda is effective for treating wasp stings. Baking soda can be used to have a soothing effect alone in water or with vinegar. Make a paste of baking soda with water and apply it on stung area. Or mix baking soda and vinegar equally to soothe the irritation caused by wasp sting.

The acid of lemon acts as a neutralizer against the venom of wasp stings. Hold a fresh slice of lemon over the sting site to get rid of pain or apply a few drops of lemon juice. It helps to reduce pain as well as puffiness of the site by holding slices for some time.

Once the stinger is removed slice an onion in half and smoothly rub on the affected area. Onions contain a healing enzyme which is able to relieve the pain and promote the healing process. The onion also contains useful antibacterial properties which subside the swelling, redness and pain should subside within 5-10 minutes.

Aloe vera has an Antibacterial and Anti inflammatory properties which aid to reduce swelling and pain. All what you need is a gel oozing from afresh aloe vera leaf. Application of aloe vera gel speed up the healing process and soothes the pain.

Butter knife is one of the first things you must do in order remove the stinger when wasp sting. Simply scrape a dull butter knife against skin in the opposite direction that the stinger entered your skin.

Honey has antibacterial properties that make it a useful home remedy for wasp s tings. One can get a relief from swelling and pain by simply applying some honey on the site of the sting.

Lavender oil helps to neutralize the venom instantly. Lavender essential oil is incredibly soothing; it can relieve pain, reduce the annoying itching, and reduce the swelling.

I hope that the above given information will help you as it’s all about a handy way of managing wasp sting and natural remedies to it which is readily available around us.

Share
Previous Post-Nasal Drip Remedies at home naturally
Next How long does Alcohol stay in your Blood?