Read about Epiglottis Function in Digestive and Respiratory Systems.

The word epiglottis is derived from two terms; epi means above and gets its name from being above the glottis. The epiglottis is a flap made of elastic cartilage tissue covered with a mucous membrane, attached to the entrance of the larynx and the base of the tongue.

It projects obliquely upwards behind the tongue and the hyoid bone, pointing dorsally. The epiglottis is one of the nine cartilage structures that make up the larynx and it is covered with taste buds. 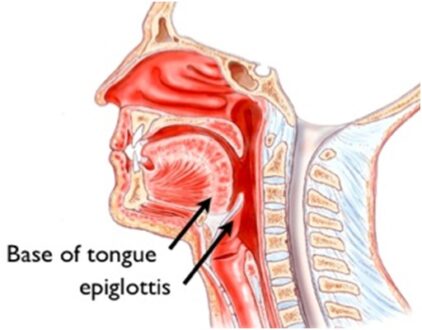 The epiglottis is made of elastic cartilage covered with mucous membrane. Its anterior surface consists of nonkeratinized stratified squamous epithelium that is consistent with the tissues of the mouth and pharynx.

On the posterior surface, it is covered with pseudo stratified columnar epithelium that is consistent with the tissues lining the larynx.

Under the epithelial layer is a thin layer of areolar connective tissue that provides a loose attachment for the epithelium and supplies it with blood vessels and nerve fibers.

Mucous membrane coats the epiglottis. The side facing the mouth is covered in cells similar to those in the rest of the mouth, whereas the backside is covered with cells resembling those of the larynx.

It stands open during breathing, allowing air into the larynx. During swallowing, it closes to prevent aspiration, forcing the swallowed liquids or food to go down the esophagus instead. It is thus the valve that diverts passage to either the trachea or the esophagus.

Therefore, it acts as a switch between the larynx and the esophagus to permit air to enter the airway to the lungs and food to pass into the gastrointestinal tract. The epiglottis also protects the body from choking on food that would normally obstruct the airway.

In its relaxed position, the epiglottis projects into the pharynx, or throat, and rests just posterior to the tongue. Viewed from the posterior direction, it is shaped like a teardrop with a wide, rounded region at the superior end and a narrow tapered point at its inferior end.

Two tiny ligaments hold the epiglottis in its resting position in the throat. These are

Thyroepiglottic Ligament:The thin thyroepiglottic ligament connects the inferior point of the epiglottis to the thyroid cartilage of the larynx.

Hyoepiglottic Ligament: The hyoepiglottic ligament connects the anterior surface of the superior region to the hyoid bone.

Many people tend to mistake the Epiglottis with the glottis. Both are structurally and functionally different parts of the anatomy. The epiglottis is the cartilage flap fixed to the entrance of the larynx.

Function of Epiglottis in Digestive System

The Epiglottis function in swallowing is a very important one. While swallowing food and water, it draws itself back to cover the entry point of the larynx which prevents food and drink from going into the windpipe.

These edible substances enter the esophagus and directly go into the stomach. When the swallowing action ends, the epiglottis moves up once again making normal flow of air into the trachea (windpipe).

Function of Epiglottis in Respiratory System

The Epiglottis function in respiratory system is a very important one. It is because of this cartilaginous structure that you do not choke while eating or drinking. It is because the Epiglottis shuts the entrance to the trachea that food and drinks are transferred to the digestive system.

However, sometimes food or liquid falls into pockets at either side of the Epiglottis. These can be safely coughed up and choking can be prevented. This is the reason why it is not safe to talk while swallowing.

Function of Epiglottis in Speech

The Epiglottis has a vital role in speech. It acts as an articulator in the production of vowels and pharyngeal consonants. In pharyngeal, Epiglottis articulates against the posterior pharynx wall. During slow speech, the speech is generated through a narrow opening.

While pronouncing vowels, the opening between the Epiglottis and the pharynx becomes larger. In case of pronunciation of consonants, the aperture becomes smaller. Epiglottis is also involved in whisper, though it is seen to be more retracted than in normal speech.

If the epiglottis is infected or inflamed, it can lead to epiglottitis. If the epiglottis becomes too swollen, it can block air from getting through to the trachea. This is a life-threatening situation and medical treatment should be sought immediately.