Dysgerminomas occur most often in the ovaries, but they may also occur in other areas of the body, including the central nervous system. Some dysgerminomas make a hormone called beta-human chorionic gonadotropin (beta-HCG) that may cause signs and symptoms of disease.

It is a type of cancer that begins in germ cells in females. Germ cells are cells that form sperm in males or eggs in females. Dysgerminomas tend to grow and spread slowly. They are the most common type of ovarian germ cell tumor. They usually occur in teenage girls or young women.

Abdominal symptoms including pressure, pain, pelvic pressure, low back discomfort, mild nausea, feeling full early when eating, constipation and gas are all non-specific in nature. In their early manifestations they are asymptomatic.

The incidence of dysgerminomas has remained unchanged over the last 30 years. The frequencies of the most common malignant ovarian neoplasms in women of reproductive age are as follows: epithelial tumors (42%); dysgerminoma and other germ cell tumors (GCTs) (30%); metastatic Krukenberg tumors (14%); and sex cord stromal tumors (ie, Sertoli-Leydig cell tumors) (13%). 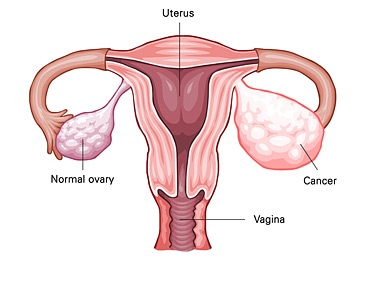 Dysgerminoma is the most frequent malignant germ cell tumor of the ovary. Dysgerminomas are generally solid and large with a white surface and are plain or irregular. When dissected, they look white and homogeneous and sometimes have necrotic areas.

Dysgerminoma are almost totally symptoms free or asymptomatic in the early stages. Abnormal bleeding during menstruation should raise alarm and suspicion but again non-specific. The symptoms can be summarized as:

The exact cause of Ovarian Dysgerminoma is unknown; however they are thought to occur if the Germ

Cells that escape encapsulation from the Ovarian Follicle fail to die. The other causes include:

Dysgerminoma treatment is of various types. These tumors are highly treatable and respond well to chemotherapy and radiation particularly when these treatments are done together (chemotherapy can shrink the tumor, but it is recommended that radiation be given to the patient, as well). The tumor may metastasize, or spread, to the liver, lungs, lymph nodes, or bones. Women with stage I dysgerminoma often undergo surgery that isolates the mass as much as possible in order to preserve their fertility. This procedure, along with aggressive follow-up care, improves their prognosis considerable. There are different types of treatment for patients with ovarian germ cell tumors.

New types of treatment are being tested in clinical trials.

Dysgerminoma prognosis of 5-year is 96% if the tumor is confined to the ovary and 63% if extension occurs beyond the ovaries. Pregnancy does not alter the prognosis of most ovarian malignancies, but complications such as torsion and rupture may increase the incidence of spontaneous abortion or preterm delivery. Prognosis of dysgerminoma depends on;