Flexion finger contractures are the common concern of clenched fist patients. This syndrome is considered a psychiatric disorder. There is no specific cause discovered so far. Some people consider it as a conversion disorder while others claim that it is a factitious disorder.

Conversion disorder means that the symptoms are shown in the patient unintentionally. While on the other hand, factitious disorder is when the CFS syndrome symptoms arise intentionally or consciously.

The symptoms get worse if the patient is recommended for surgical procedures. Clenched fist syndrome is often accompanied by other health conditions which include schizophrenia, obsessive-compulsive disorder, and depression. These types of disorders happen rarely, so most of the time either they are overlooked or misdiagnosed. 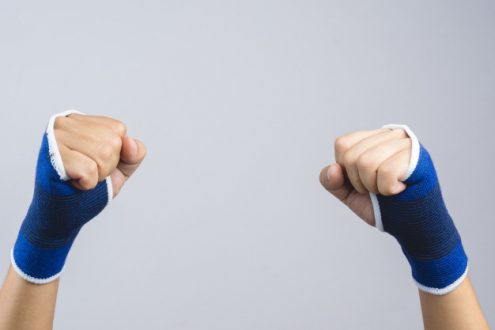 Clenched fist syndrome is a psychopathological disorder that was considered SHAFT syndrome in earlier days. The primary reason was due to the symptoms experienced by the patients. SHAFT acronym means

The symptoms of clenched fist syndrome include all of the above. Apart from the patients might experience

The flexion deformities can be simple or lead to the contraction of the entire hand, which is very painful. The disease can be triggered by minor trauma as well. Interphalangeal joints of both hands are involved typically. During the first consultation, there should be a psychiatric analysis of the patients and psychiatric comorbidities are normally present.

Although there is no determined cause behind clenched fist syndrome. But numerous clinical studies reveal that stroke can be a possible cause of tightly clenched hands. The main reason is that after a stroke the movement of hands is usually limited.

This will eventually lead to destruction or shortening of soft tissue in the hands causing spasticity or in some cases contraction and clenched fists. Painful stiff muscles and muscle spasms are known as spasticity. On the contrary, contracture is the lack of movement with the stiffness of the muscles.

The muscles and ligaments tend to shorten if the body doesn’t move for a specified period. The mobility of the muscles is restricted or partially paralyzed leading to chronic pain. The pain is excruciating if the muscles of the affected area contract.

Clenched fist syndrome is caused when communication between the muscles and the brain is severely damaged. During a stroke, the area of the brain is damaged which controls the movement of the body. The brain is unable to send accurate signals to relax the muscles.

For the past couple of decades, the treatment of clenched fist syndrome has been modified to a great extent. There are more effective treatments nowadays which can cure clenched fist temporarily or permanently in a few cases.

Temporary treatments are usually considered the first-line treatment after the stroke for the relief of spasticity. According to the latest clinical studies, most patients opt for short-term relief after stroke and they work on managing the symptoms permanently simultaneously.

There’s nothing wrong with it. Consistent work and dedication are required when it comes to permanent stroke rehabilitation. This can make the treatment period less daunting for the patients. Hence, improving the quality of life. Botulinum toxin also known as botox is known to provide short-term relief in this case. The targeted muscles are injected with botox.

It will work as a nerve blocker if it is administered in an accurate dose. In return, the function of the hand is restored by relaxing the muscles. The full effect of botox is visible within 2 to 4 weeks. As it is short-term relief, repeated treatments are necessary.

Medications like benzodiazepines or muscle relaxants are often prescribed to relax the muscles. Baclofen is a commonly prescribed drug that is used to reduce spasticity, contracting muscles, and pain. If the contraction is due to the contraction in skeletal muscles then dantrolene is prescribed. Furthermore, sometimes your doctor might recommend clonidine, which is a hypertension medication to manage the symptoms of clenched fist syndrome.