The Carotid Artery Massage is one of a number of medical procedures called “Vagal maneuvers.” Vagal maneuvers stimulate the vagus nerve (located along the side of the head) and prompt it to release chemicals which slow a patient’s heart rate).

Painful carotid sinus is a common condition which is rarely recognized and often overlooked. The pain is localised in the area of the common carotid artery and at the level of the carotid bulb. The etiology is usually not known and different causes such as inflammation, tumours around the artery or lymphadenitis nearby have been blamed for it.

This is a benign condition, gives rise to no significant lesion of the artery and has a dramatic response to simple analgesics or a combination of simple analgesics and steroids. Fay1 was the first to describe this condition followed by Hilger2 who described it as “Carotid Pain” due to an imbalance of the autonomic nervous system of the carotid tree resulting in Angiospasm and Oedema but no inflammation. Lovshin3 called it “Vascular Neck Pain”, attributed it to an autonomic dysfunction, and treated his patients with a combination therapy of analgesics, psychotherapy, tranquilizers and ergotamine pre­parations.

Saunders mentioned the possibility of a viral etiology and called it carotid arteritis. He proposed a corticosteroid therapy which was the only effective treatment in his series. Chiossone and Ouiroga4 concluded it to be a viral infection which responded well to steroids with or without analgesics. More recently a Hypersensitive Caro­tid Sinus. The carotid sinus reflex plays a central role in blood pressure homeostasis. 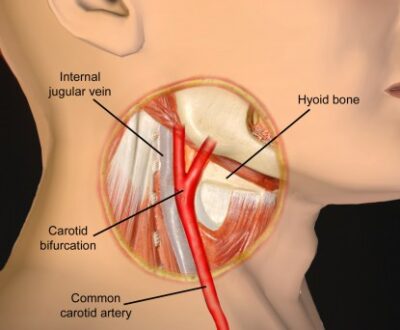 Carotid sinus massage can result in one of four possible effects:

Carotid sinus massage is indicated in the elderly patient who has a history of unexplained falls, loss of consciousness and presyncope, and in whom results of the cardiac and neurologic work-up have been inconclusive. Because syncopal episodes account for a large number of emergency department visits in the elderly, physicians should know how to perform this maneuver. Risk factors are;

How to do Carotid Sinus Massage?

Carotid sinus massage should be done as;